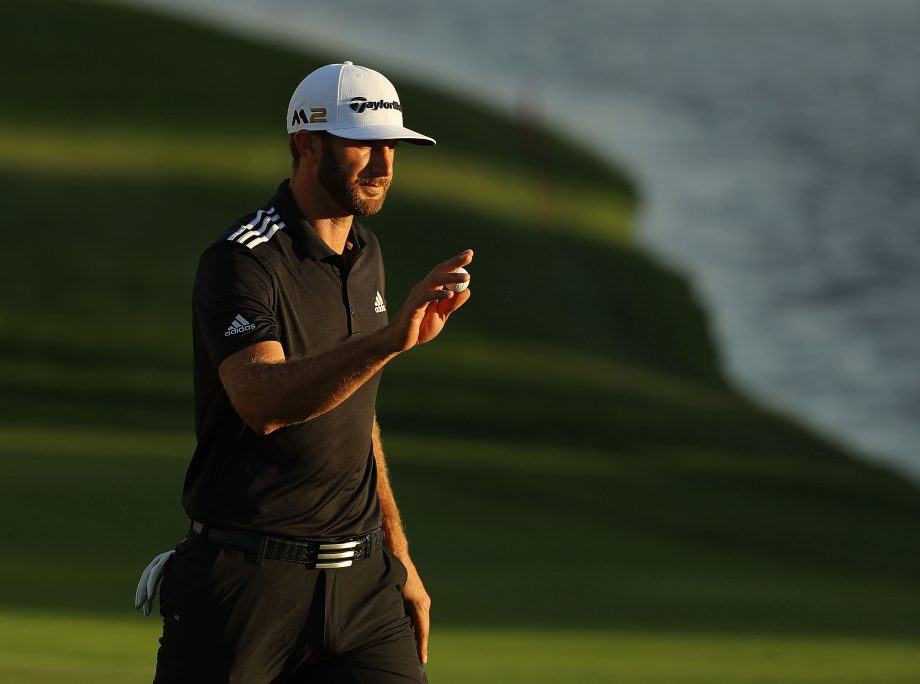 CARMEL, Ind. – Dustin Johnson plays a different game than anyone else, and he wanted to keep it that way.

Right down to his putter.

The U.S. Open champion made a late change just before starting the BMW Championship, and so far he has no complaints. Johnson finished with four birdies over the last five holes Saturday on soggy Crooked Stick for a 4-under 68, stretching his lead to three shots going into the final round.

He is smashing his driver long and straight, just like always. He is hitting wedges good enough for multiple birdie chances.

And now the putts are going in.

“The strength this week has been putting,” Johnson said. “I’m rolling it really nicely. Even the putts that I’m missing still look like they’re going in.”

He was particular about the change, though.

Johnson decided to switch to the TaylorMade Spider. But right before he teed off in the opening round, he was bothered by one aspect of his new weapon. It was red, just like the model world No. 1 Jason Day uses. He recalled that his brother and caddie, Austin, had a similar model.

“I was putting good with it and right before we were about to tee off on Thursday, I’m like, ‘AJ, don’t you have the same one in black?’ And he says, ‘Yeah.’ And I said, ‘Go get it.’ I just didn’t want to use the same putter Jason was – like, the exact same one. That was really the only reason I changed.”

Eighteen birdies and one eagle putt later, Johnson was at 18-under 198 and closing in on his third victory of the year.

Paul Casey did his best to stay with him. Casey, coming off a runner-up finish on Labour Day at the TPC Boston, matched two of Johnson’s birdies during his late run until he had to scramble for pars on the last two holes. He still managed a bogey-free 68 and will be in the final group Sunday.

Casey missed five fairways, his most this week in any round, yet still managed to keep bogeys off his card with smart shots out of the wet rough and solid putting. And he still matched Johnson’s score, even though he didn’t make up any ground.

“Not much you can do,” Casey said. “He’s got maybe the best attitude in golf. When he gets on his game, maybe the best ball-striker in golf. Maybe the longest. And he showed it today. So, if he keeps doing what he’s been doing – what he averaging, 6 under a day? – if does the same tomorrow, there’s no catching him.”

Johnson will be going for his third victory of the year, which would move him to the top of the FedEx Cup going into the finale at the Tour Championship in two weeks and make him a heavy favourite to win PGA Tour player of the year and the Vardon Trophy.

Still in the mix was J.B. Holmes, who shot a 68 and was four shots behind. Holmes at least is making a compelling case to be a captain’s pick for the Ryder Cup when Davis Love III announces three of his selections on Monday. Holmes finished 10th in the U.S. standings.

Roberto Castro, who began the third round tied for the lead, didn’t make a birdie in his round of 74 and fell six shots behind. Worst yet, the Georgia Tech alum who lives in Atlanta hurt his chances of moving into the top 30 who advance to the Tour Championship.

Barring a collapse by Johnson – it has happened before – his big finish after a rain delay earlier Saturday eliminated several players. Adam Scott finally got some putts to drop and with birdies on the last two holes, he shot a 67 and joined Matt Kuchar (68) at 11-under 205.

But they finished before Johnson was done making birdies, and both were seven shots behind.

“I’m certainly a long shot. I’m a long way back of the leaders and some great names on the leaderboard,” Kuchar said. “But I got a chance, and golf on Sunday in fun when you have a chance.”

Jordan Spieth had such a poor day putting that the distance of his total putts added to 30 feet, 6 inches. Spieth routinely makes one putt from that distance in a round. He was helped by two chip-ins, one for birdie and one for eagle , but closing with two straight bogeys gave him a 68. He was 10 shots behind, and his attention turned to a strong finish with hopes of getting one of the top five seeds at East Lake in the Tour Championship.

Anyone in the top five only has to win the Tour Championship to claim the FedEx Cup and its $10 million bonus.

Other Ryder Cup hopefuls didn’t shine. Bubba Watson had to settle for a 72, while Rickie Fowler shot 71 and was tied for 59th.