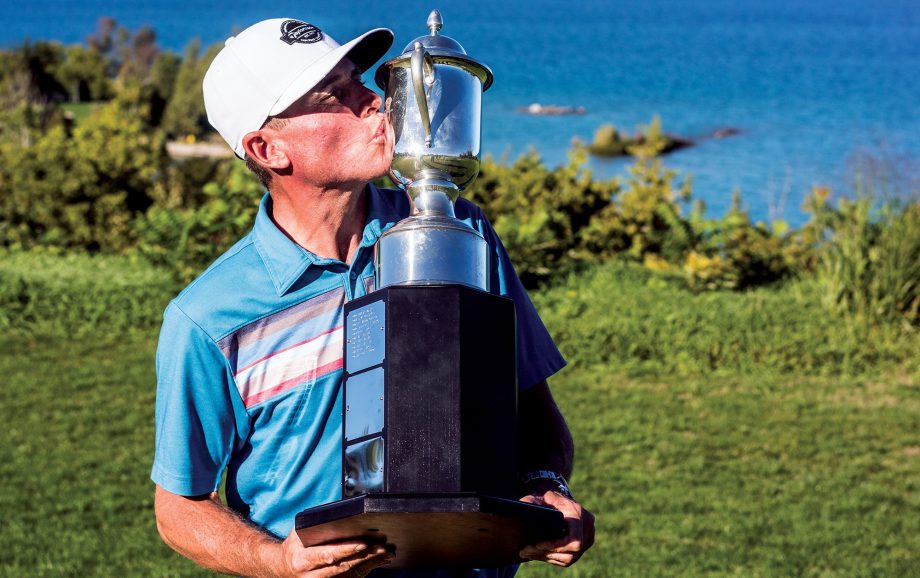 “All week I had the same goal of getting to 18-under-par,” Risdon said. “I had to make three birdies coming home to get to the number and I did, so that’s pretty awesome.”

Risdon’s final round 8-under-par 64 included nine birdies and a bogey—his first and only of the championship—at No. 11.

“I was grinding out there all day and was really nervous to be honest,” he admitted. “The bogey-free streak has been on my mind for the last couple days and I definitely didn’t want to slip up and let anyone back in the tournament.”
He most definitely didn’t let anyone in the field even get a scent of the top-spot, pouring in putt after putt on Lora Bay’s tricky greens.

The Calgary native’s last national championship came in 1997 when he won the Canadian Junior Boys Championship as a 16-year-old, but he says his win this week in definitely more special.

Risdon is a three-time Mackenzie Tour-PGA Tour Canada winner and played fulltime on the Web.com Tour in 2009 and 2010, amassing four top-10 finishes and winning nearly $200,000 USD.

“To be truthful I probably didn’t see myself playing this well ever again,” Risdon said. “There’s a lot of ups and down on the golf course and I’ve learned a lot about myself, my personality and how to deal with things out there.”

The win this week at Lora Bay caps off an impressive year for Risdon, who captured seven PGA of Alberta events in 2016. Risdon was also part of Team Alberta—which included Belbin, Wes Heffernan and Kasey Timms—that won the InterZone competition, winning by a remarkable 15-shots over Team Ontario.

Brian McCann, Sonny Michaud and Kevin Stinson finished 6-under-par, T5; while John Shin and Heffernan were T8 at 5-under. Nick Kenney and Dave McDonald rounded out the top 10 at 3-under.