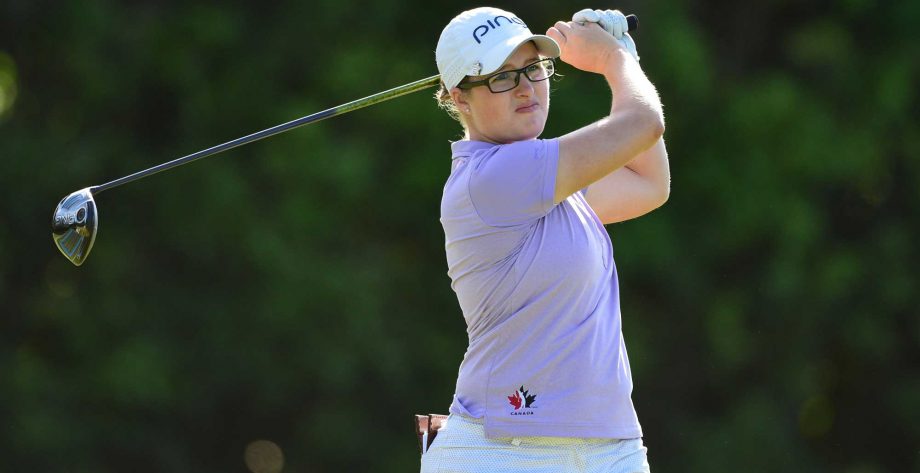 CHARLOTTE, N.C. – Kendall Dye of Edmond, Okla. carded a Symetra Classic tournament-record 7-under 65 on Saturday to take a one shot lead into the final-round on Sunday. Dye moved to 10-under, 134 and will aim for her second career win. Augusta James of Bath, Ont., drained a 30-footer on her last hole to shoot a 5-under, 67 and is 9-under, 135. Erica Popson of Davenport, Fla., turned in a 4-under 68 to move to solo third at 6-under, 136.

Dye made nine birdies on the day including three in a row to end the round.

“It was all about my putter,” said Dye, who one-putted the final five holes. “Normally, I find fairways and greens, but today it was hard work and I had to get up-and-down. Once I got a putter in my hand, I was making it or getting real close. It was nice to see them go in.”

Dye attempted just 24 putts on the day. For the first time in 20 plus years, Dye changed her putting grip this week.

“I was tired of insanity, doing the same thing over and over and not seeing the ball go in so I switched it up because it couldn’t have got any worse,” said Dye, who googled videos of Jordan Spieth. “I knew this course set up to my eye, it is a course similar to the one I grew up playing in Oklahoma City and you have to move the ball both ways and I love that.”

Dye struggled on the LPGA in 2015 and is off to a hot-and-cold start in 2016. She has one top 10 finish, but also missed back-to-back cuts in early April.

Dye and James will play in the final group on Sunday and tee at 1:10 p.m.