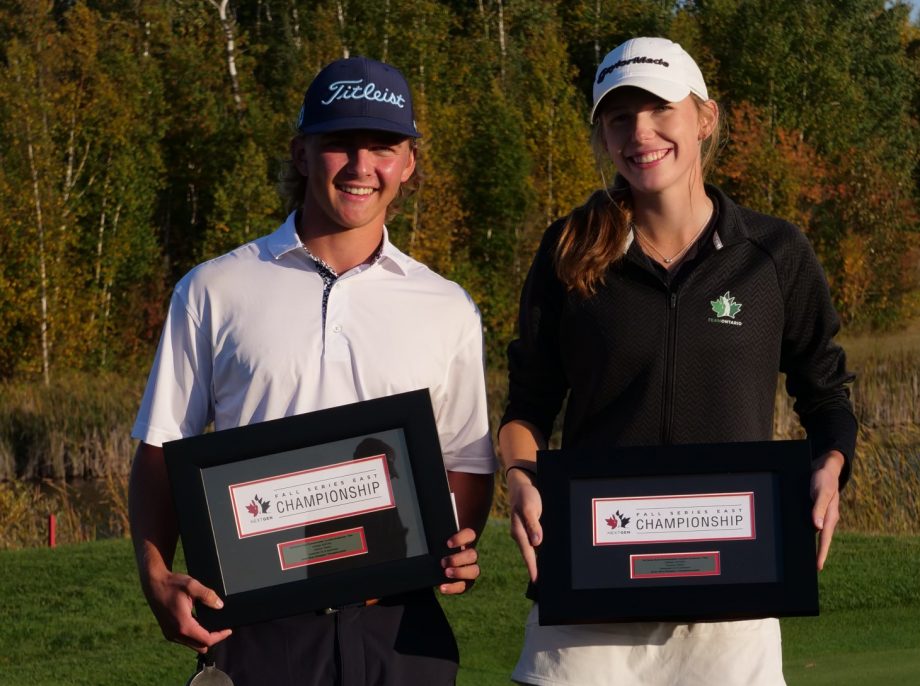 Timmins, Ont. — The final round of the NextGen Fall Series East Championship concluded with Ella Weber of Burlington, Ont., sealing the victory in the Girls division with a two-stroke win at the Hollinger Golf Club on Sunday. In the Boys division, Cameron Pero of Bloomfield, Ont., emerged as champion with a three-stroke victory.

Weber, who plays out of RattleSnake Point Golf Club, closed with a final-round 77 to leapfrog into first place to take home the title. The four-time CJGA champion made her mark in the front nine, carding an even par 36 to distance herself from the field.

Rounding out the top three were Nyah Kelly (Lindsay, Ont.) and 36-hole leader Karolyn Zeng (Vaughan, Ont.), both finishing tied for second place at 18 over par. The duo will join Weber next year at the Canadian Junior Girls Championship.

In the Boys division, Pero held on to his second-round lead on Sunday after a final-round 72 (+1) sealed the deal. The Picton Golf & Country Club member birdied two of his first four holes to find an early rhythm on route to the three-stroke victory.

“Everything came together this week for me,” said Pero. “My irons left me a lot of easy putts which really helped… the course was super tough.”

Finishing second was Ben MacLean of Niagara Falls, Ont., who shot a 1-under-par 70 on Sunday to finish at 4 over. He was trailed by Aurora, Ont., product Ryan Somerville who closed the tournament at 9 over par. All three competitors earned exemptions into the 2022 Canadian Junior Boys Championship at Rivershore Golf Links in Kamloops, Ont., from Aug. 8-11.

The competition marked the third year of the Fall Series, and first under the new NextGen umbrella. The second and final NextGen Fall Series championship takes place next week from Sept. 24-26 at Myrtle Point Golf Club in Powell River, B.C.