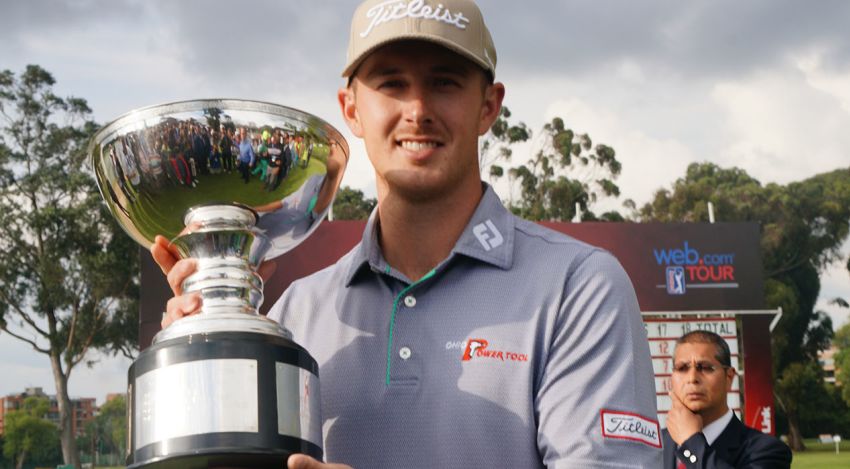 BOGOTA, Colombia – Ethan Tracy moved into the top spot on the money list with a thrilling overtime victory at the Club Colombia Championship by Servientrega. Tracy and Mexico’s Roberto Diaz were gridlocked at 13-under-par 271 at the end of regulation and headed back to the par-5 18th hole at Country Club de Bogota to determine the winner.

Brandon Harkins held the lead most of the day and was 15-under-par walking off the 12th green. The 54-hole co-leader struggled coming in and bogeyed three of the last six holes. Harkins missed a birdie try from just off the back of the green on 18 to join Diaz and Tracy in the playoff.

After the pair tied the first extra hole with par, Tracy rolled in a 20-footer for birdie on the second hole to secure his first Tour win and a first-place prize of $126,000. Tracy had missed the cut in the first two events of the season but moved into the top spot on the Tour money list with his triumph in Bogota.

“I was just grateful to be in the playoff,” said Tracy, who holed out from the fairway on the 72nd hole to finish at 13-under-par. “Somehow I made a great shot, and I was fortunate that it went in. I capitalized on a good shot in the playoff with a great putt. Overall, the 18th was pretty good to me.”

In regulation, Tracy laid up with a 7-ion on the home hole and was left with 101 yards for his third. The 27-year-old from Columbus, Ohio dunked a wedge for an eagle three to tie Diaz for the lead.

“I was trying to make it,” said Tracy, who played the par-5 5-under for the week. “I knew 13 was the number. I was going to get it all the way back to that pin and if it went over so be it. I had to give it a chance.”

“I won the Western Amateur and beat quite a few players on the PGA TOUR,” said Tracy. “I can’t wait to get out there and compete with them again.”

Tracy and former University of Arkansas teammate Andrew Landry are poised to earn their PGA TOUR cards this season. The duo are No. 1 and No. 2 on the money list after the first three events.

“Him (Andrew) and I were teammates my freshman year and we’re actually rooming together this week,” said Tracy, who has a $7,850 lead over his college buddy. “We’ll see if we can keep this Arkansas streak going next week.”

After two missed cuts in the Bahamas, Tracy spent countless hours at The Blessing Golf Club in Fayetteville working on his craft. The relentless pursuit of excellence has given the four-year professional confidence.

“I know I’m playing well and putted well this week,” said Tracy. “I just went home in the off-week and worked hard and it shows that my hard work is paying off.”

Canadian Corey Conners of Listowel, Ont. shot 4-under 67 to finish T17 at 7-under for the tournament while Thornhill, Ont. native Ben Silverman was even par 71, good for a share of 62nd at 4-over.

* Tracy moves to No. 1 on the money list; he was previously unranked.

* Tracy’s win comes in his fourth start on Tour.

* Down the stretch, Tracy went par-birdie-eagle to close out the tournament.

* Tracy is the second player in his 20s to win this season on Tour – Andrew Landry.

* Tracy is the second Arkansas Razorback to win on Tour this season – Andrew Landry.

* Andrew Landry and Ethan Tracy (Arkansas) have won in consecutive starts on the Web.com Tour. The only other two golfers from the same college to win on Tour in consecutive weeks were Michael Clark II (1996 Olympia Open) and Tripp Isenhour (1996 Web.com Tour Championship).

* Roberto Diaz finished runner-up for the second time in his career. Diaz picked up a check worth $75,600 and moved to No. 4 on the Tour money list.

* Alex Kang closed with a final-round 66 and was one shot shy of the playoff. The T3 in Bogota is Kang’s best showing on Tour in four starts.

* Brandon Harkins carded a final-round, 1-under 70 to miss out on the playoff by a shot. Harkins’ T3 places him No. 10 on the money list and gets him into next week’s Panama Claro Championship.