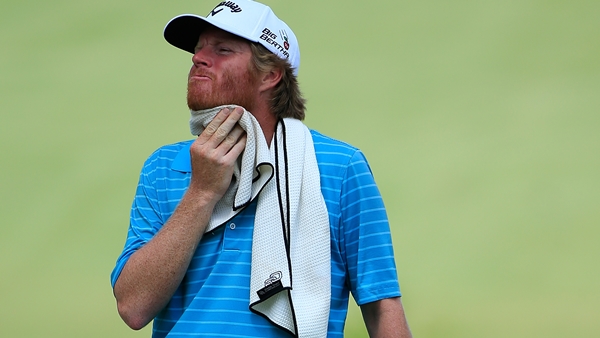 DAVIDSON, N.C. – Derek Fathauer shot his second straight 6-under 66 on Friday to take the second-round lead in the Chiquita Classic, the second of four events in the Web.com Tour Finals.

Fathauer, 12th on the Web.com Tour’s regular-season money list to secure a 2014-15 PGA Tour card, rebounded from a bogey with seven birdies in an eight-hole stretch from No. 17 to No. 6 at River Run.

“I just kind of shook it off and went on a little run from there,” Fathauer said. “I’m just trying to go out there and play every hole the way I drew it up in the practice round. I know there are birdies out there.”

The top 25 players on the Web.com money list are competing against each other for PGA Tour priority, with regular-season earnings counting in their totals and the final leader getting a spot in The Players Championship. The other players – Nos. 26-75 from the Web.com Tour money list and Nos. 126-200 in the PGA Tour’s FedEx Cup standings – are fighting for another 25 cards based on their earnings in the four tournaments.

Greg Chalmers, Brett Stegmaier and Scott Pinckney were tied for second at 10 under. Chalmers shot 65, Stegmaier 66, and Pinckney 68. Chalmers, from Australia, was 132nd in the FedEx Cup.

“I push a little harder on the weekend trying to make things happen,” Chalmers said. “I need to control that tomorrow.”

Pinckney was 39th on the Web.com money list, and Stegmaier 41st.

“My ball-striking has been great,” Pinckney said. “I’ve been giving myself opportunities and capitalizing by making a couple of good putts.”

Canada’s Adam Hadwin, the first-round leader after a course-record 63, had a 72 to drop into a tie for fifth at 9 under.