Finally, Tiger posts round worth getting warm and fuzzy over 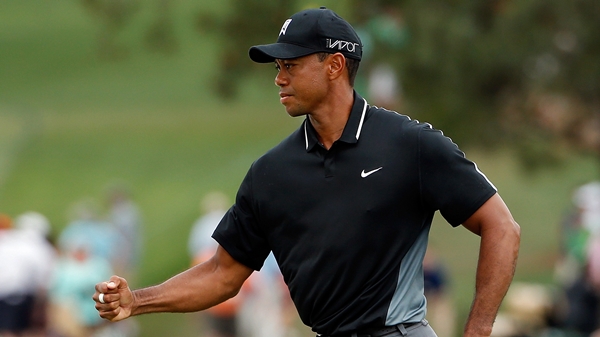 AUGUSTA, Ga. – The man was so darned agreeable from tee to green you half-expected his post-round interview to begin:

“Thank you, ladies and gentlemen, I’m Tiger Woods and I’ll be here all week. Don’t forget to tip your server.”

If you thought Woods conducted himself like a recent charm-school graduate at a few Masters events earlier this week, you should have seen him Friday, when he finally put together a round of golf worth getting warm and fuzzy over. He laughed a lot, worked the crowd, chipped the ball reasonably well, and even cracked the occasional joke.

Shooting 69 will do that for a tortured soul, especially since that was the best number Woods has posted at Augusta National since the final round in 2011. It was miles better than anything in his only two outings in 2015: a missed cut at Phoenix and first-round withdrawal at Torrey Pines.

“All you gotta do is believe!” a fan along the ropes shouted as Woods strode to the ninth tee after back-to-back birdies.

Woods cracked a wide smile. “I hear you bro,” he said.

Walking off the same tee a few minutes later, after his drive curled to a stop at the right edge of the fairway, Woods caught caddie Joe LaCava talking with a friend.

“Get your mind back on golf!” he barked at LaCava in mock anger, then nearly burst out laughing.

If those few moments of brilliance on the course were reminiscent of an earlier Woods, his demeanor was something almost entirely new. He isn’t sniffing any roses yet, but he certainly seems more interested in the view. After an absence of 11 years, Woods returned to the par-3 contest with his kids and girlfriend Lindsey Vonn in tow.

Instead of the thousand-yard stare, he regularly made eye-contact with fans. Instead of threatening to helicopter a club down the fairway after a bad shot – as he did at No. 15 on Thursday – Woods simply dropped his head to his chest for a heartbeat, then quickly collected himself and headed down the fairway.

More telling, perhaps, he answered patiently when two of the seven questions he fielded post-round were about Jordan Spieth, the 21-year-old Texan who’s stolen the spotlight and is threatening to run away with the tournament.

The old Tiger rarely made time to talk about anyone else.

Asked if he could remember what it was like to be 21 and leading the Masters – as he had in 1997 – Woods said, “Well, the difference is that he’s separated himself between first and third. I didn’t have that separation after two rounds. I believe I only had a three-shot lead at the time. So there’s a big difference. He’s put out a big enough gap between the rest of the pack.”

And when the talk turned back to Woods, he turned reflective – at least as reflective as most of us could remember.

“Very proud of what I’ve done, to be able to dig it out the way I have,” he said.

“I told you guys on Tuesday, I was at a pretty low (point) in my career. But to basically change an entire pattern like that and put it together and put it in a position where I can compete in a major championship like this,” Woods added, “is something I’m very proud of.”

He’s been humbled by a lack of success and a variety of ailments, some self-inflicted, others beyond his control. At 39, nearly all of the sponsors who deserted him after the car crash at the end of his driveway have stayed away and his body has been betraying him with alarming frequency.

His pursuit of Jack Nicklaus’ record of 18 career major championships has been stalled at 14 for seven years now.

One thing, though, hasn’t changed: Woods still talks bravely about winning every time he sets foot on a course.

“I’m still right there. I’m 12 back (behind leader Spieth), but there’s not a lot of guys ahead of me. And with 36 holes here to go, anything can happen, you know. … There’s so many holes to play and so many different things can happen.”

Yet those pronouncements sound hopelessly dated now, even at Augusta National. There was a time when a charge by Woods up the leaderboard here – even a modest one like Friday’s – sent ripples through the galleries and shivers down the spines of his rivals.

He may be in the same place, but that seems like an increasingly distant time.