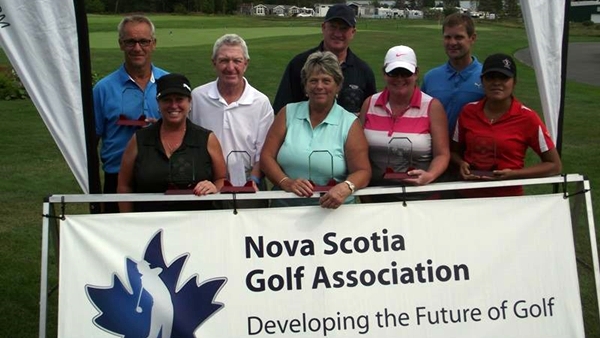 The first Atlantic Golf Championship will be remembered as a successful event as the last round came to an end Sunday at Bell Bay Golf Club. The championship, the first of its kind in Atlantic Canada, brought together 73 golfers from all four Atlantic Provinces with male and female competitors in four divisions, amateur, mid-master, senior, and super senior.

The talk amongst the players was overwhelmingly positive as many are already making plans if they are to qualify for next year’s Atlantic Championship which will take place at Terra Nova Golf Club in Newfoundland. One of those players was Jean E. Boudreau who won the women’s super senior division and said she was pleased with how the weekend went.

“I didn’t know what to expect coming, but I was pleasantly surprised everything was well organized and I think it’s great by the provinces to have both the men and women here,” said the Hartlen Point Golf Club member.

On the course, players competed for individual placing in their respective categories, below are the winners from each division who have earned exemptions into their respective divisions at next year’s Canadian amateur championships.

Women’s Super Senior
Jean E. Boudreau won the division, however ,it did not come easily as both her and New Brunswick’s Kathy Meagher finished the 54 hole event with identical scores of 257. In the playoff, it only took one hole for the championship to be decided as Boudreau wins the first super senior Atlantic Championship.

Men’s Super Senior
David McDonald was the wire-to-wire winner in the men’s super senior division, winning by 21 strokes over his nearest competitor. McDonald, an Ashburn Golf Club member, had solid rounds of 75-78-77.

“I enjoyed the course it’s very challenging you can’t spray the ball, I thought I drove the ball well, my irons were ok, and I thought I putted very well. Overall I was very happy with how I played,” said McDonald who had to forfeit playing in his club championship to attend.

Women’s Senior
Sherry White of Belvedere Golf Club was the inaugural senior women’s champion besting Newfoundland’s Kathleen Jean by 8 strokes for the victory. White, who has won the women’s senior and amateur the last two years with the PEIGA, said she was very excited about the event when she heard about it last year.

“I was really excited last year, and it was a great tournament, Bell Bay was incredible the staff were great, the meals were great, it was a lot of fun,” said White.

Men’s Senior
Hometown favourite Ernie Sheaves was the wire-to-wire winner in the men’s senior after firing an even par 72 on Sunday. Sheaves, who is a Bell Bay member, was impressive all weekend and finished with a comfortable lead over PEI’s Ron Garrett.

“Well, obviously to win here at Bell Bay is great, but just to play consistent golf is what is really satisfying,” explained Sheaves on his weekend experience. ” I think the event is great, the format with a smaller field and combining both men and women is a good idea.”

“I like it because it allows players to play other good golfers from around the region,” she explained. “That should help in preparation for nationals.”

Outside of golf, Comeau has a winning track record in curling as well attending multiple Scotties National Curling Championships.

Men’s Mid-Master
Tim Yorke of Anderson’s Creek Golf Club continued his excellent play firing a 2-under 70, to finish 3-under-par for the event. Yorke, an accomplished golfer in Prince Edward Island, won by six strokes over New Brunswick’s Stu Musgrave who outside of a poor first round shot 72-69 on the final two days.

Yorke said he was happy with the tournament overall and said the exemption to next year’s Canadian Mid-Amateur Championship is a great reward.

“Having the exemption is great for me,” he said. “It will allow me to perhaps adjust my schedule next year and it’s nice knowing you have it,” said the Kensington resident.

Women’s Amateur
Cristal Fitzpatrick was simply in a league of her own this weekend at Bell Bay. The Eaglequest Grandview member shot a 77 today along with back-to-back scores of 75 on day 1 and 2. Fitzpatrick would lead the Nova Scotia contingent which finished in the top three as Jennifer Comeau of Oakfield and Cathy Donald of Ashburn would finish second and third respectively.

Fitzpatrick said after a disappointing Canadian Women’s Amateur Championship winning the Atlantic Championship was a great way to end her competitive season.

“I didn’t play that well at nationals, but it was a great way to end the season,” adding she hopes to be in Newfoundland next year. “I would love to have the chance to be a part of this next year.”

Men’s Amateur
Edward Reevey of The Riverside Golf and Country Club took the men’s amateur division with a four stroke victory over Trevor Chow – an Ashburn and Bell Bay member. Reevey opened with a 77 on day 1, followed by an even par 72 on day 2. Today, Reevey continued his sharp play firing a 1-under 71 to take the inaugural division championship. Heading into the final round only two strokes separated PEI’s Cody MacKay, Reevey, and Chow. MacKay would end up having a rough day shooting an 83, while Chow could simply not catch Reevey.

“I have a history of starting off bad, I did it at this year’s amateur in New Brunswick and did it here this weekend, but it was nice I could turn it around,” said Reevey on his bounce back from day 1.

For full results and information on the 2014 Atlantic Golf Championships, please click here.