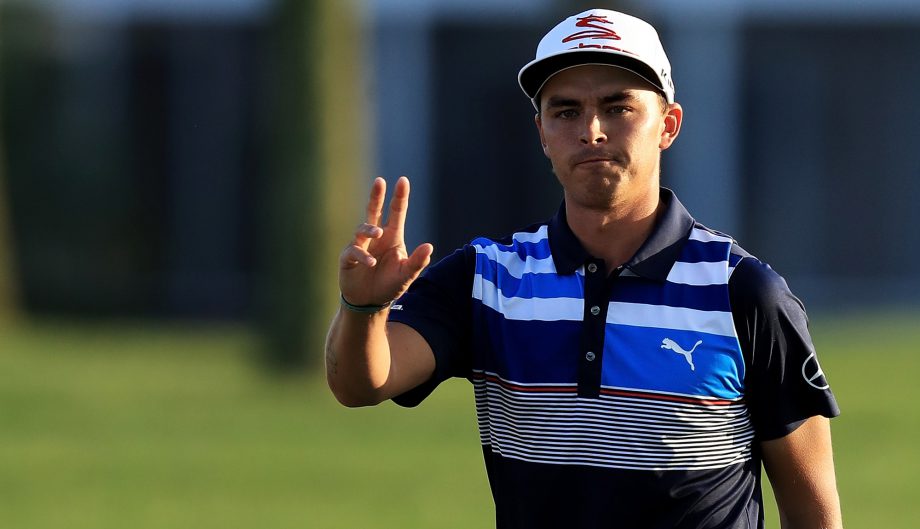 Rickie Fowler can only hope that Sunday at the Honda Classic turns out as easy as it did the last two weeks on the PGA Tour, when Jordan Spieth and Dustin Johnson converted big leads into inevitable victories.

Fowler made two birdies over the final three holes to cap a 5-under 65 that gave him a four-shot lead over Tyrrell Hatton of England as he tries to end a frustrating year of not winning anywhere in the world.

“It would be nice to follow in their footsteps,” Fowler said. “But I do have a lot of work to do tomorrow. A four-shot lead is nice. That can obviously go away very quickly, too.”

Fowler holed a 10-foot birdie putt on the 16th, got a potential break with a ruling behind the 17th green that allowed him to use a putter instead of a wedge, and then closed with a drive so bold and big that he had only a 7-iron into the par-5 18th to set up a two-putt birdie.

Spieth made three birdies over his last four holes Saturday at Pebble Beach to build a six-shot lead (he won by four). A week later, Johnson birdied his last three holes at Riviera to build a five-shot lead and won by that margin.

The difference could be PGA National, with all its water and a forecast of strong wind for the final round.

“If you’re playing from three, four shots behind, you can’t make a mistake,” Fowler said. “When you’re out front, four shots, I make a mistake, OK, we’re still up. … To be out front and be in control and with the way I feel about the game, the way I’ve been swinging, I’m looking forward to it.”

Fowler is 5 under over the final four holes at PGA National so far this week.

“Birdies happen in the Bear Trap,” he said, referring to the closing stretch. “But other numbers do, as well.”

Hatton did his work before that stretch, running off three straight birdies to get within one of the lead. But he went long on the 17th and was perplexed by the Bermuda grass that he rarely sees. He chipped 15 feet by the pin and made bogey, then left a wedge short of the 18th green and had to scramble for a par and a 66.

Hatton and Fowler played together in the third round of the British Open last year, when neither had a chance to win the way Henrik Stenson and Phil Mickelson were playing Royal Troon that week. There’s plenty at stake this time.

Hatton, in his first PGA Tour event in Florida, came into the week with no expectations and stuck to that plan.

“All you can do is try your best and play well. That’s what I try and do every week,” Hatton said. “It’s a new course for me. I played 27 holes on Monday and Tuesday, and my caddie has done enough homework. So we know what to do. Hopefully, I’ll just play well.”

Two-time major champion Martin Kaymer had a chance to join Hatton at 9-under 201 until he took bogey from the middle of the fairway on the 18th and wound up with a 68. That left him in a large group at 7-under 203 that included Emiliano Grillo, who finished his 65 just as the leaders were starting the third round.

Ryan Palmer and Wesley Bryan, tied for the lead going into another tame day in South Florida, lost ground over the final two hours. Palmer played the final 11 holes in 4 over and shot 73, leaving him seven shots behind. Bryan hit consecutive tee shots into the hazard – including the par-3 15th that led to double bogey – and he made birdie on the 18th to salvage a 72.

Fowler hasn’t won since Abu Dhabi a year ago in January. His last PGA Tour victory was in September 2015 at the Deutsche Bank Championship.

“I definitely need to put myself in this position more often, which is just going to lead to me winning more often,” Fowler said. “I’m not going to be able to take a 36- or 54-hole lead every time and win, but the more times you put yourself there, the more trophies I get to hold on Sunday.”

This is the fifth time he has held a 54-hole lead on the PGA Tour and Fowler has yet to win from that position. He had a three-shot lead going into the final round at the Memorial in 2010 and shot 73 to finish three behind Justin Rose.

There at least was small redemption from a year ago, when Fowler became the first player to go bogey-free over the opening 36 holes at PGA National. But on Saturday, he made no birdies, shot 74 and dropped out of the hunt.

“I did better than last year,” he said. “I’m definitely in a better position that last year.”