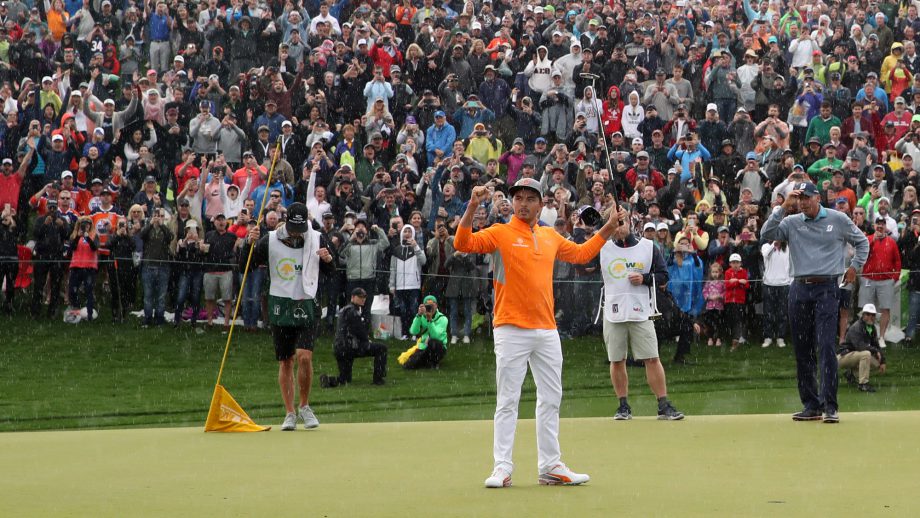 SCOTTSDALE, Ariz. – Standing above a greenside bunker at TPC Scottsdale’s difficult par-4 11th hole, Rickie Fowler turned just in time to see his ball, one he had just placed after penalty, trickle into the water.

Fowler had already seen his share of bad luck at the Phoenix Open. Now balls were rolling into hazards on their own.

Unable to catch a break, Fowler took it upon himself to create his own.

Fowler shook off a bizarre triple bogey on No. 11 with clutch shots down the stretch, finally winning the tournament Sunday that had twice eluded him.

“I didn’t think it would be easy, but the way I was playing this week, I thought it would have been easier,” Fowler said. “It was kind of grind it out. I had a couple of tough breaks and had to deal with the punches – a couple big ones – but it feels good now.”

After a pair of 64s and a 65, Fowler shot 3-over 74 in the final round on a soggy Sunday at TPC Scottsdale, highest by a winner in tournament history. He finished at 17-under 267 to beat Branden Grace by two shots for his fifth PGA Tour title.

Fowler had another over-par round with a 54-hole lead – he’s 7 for 7 there – but birdied two of his final four holes to win from the third-round lead for the second time, with the 2017 Honda Classic the other.

“He really dug down and pulled it off,” Grace said.

Wasn’t the weekend I was hoping for but overall it was a great week at the @WMPhoenixOpen! Thanks for a great week. I feel my game is moving back in the right direction! #GreenestShow #WMPO

Fowler has experienced his share of heartbreak at the Phoenix Open. He had the 54-hole lead last year and shot a 2-over 73 to finish six shots behind Gary Woodlandr. In 2016, Fowler blew a two-shot lead with two holes to go before losing in a playoff to Hideki Matsuyama, twice hitting it into the water on the drivable par-4 17th.

None of it compared to what happened to him Sunday.

Leading by four to start the day, he was up five shots stepping onto the tee on No. 11. The lead was one after a bizarre sequence of events at the long par 4.

With rain picking up, Fowler hit his approach shot right of the green and his chip skipped past the flag into the water, incurring a two-shot penalty. He dropped next to a bunker and, as he stood on the green surveying his next shot, his ball rolled back into the water without being touched.

PGA Tour rules official Slugger White determined Fowler’s ball was in play after the drop, so he was assessed a one-shot penalty. Fowler got up-and-down from there, knocking in a 17-foot putt for triple-bogey 7 – his seventh double bogey or worse when playing with a 54-hole lead.

“That was a big kind of turnaround,” Fowler said. “At worst I make bogey with a semi-decent chip and I’m still very much in control of the tournament. But with everything that happened there, that was a (four-) shot swing pretty quickly. It sucks, but it’s just kind of put that behind me.”

Grace made a 50-foot birdie putt just ahead on the par-3 12th and they were tied at 15 under when Fowler couldn’t get up-and-down from the bunker on the same hole. Grace went up one with a 3-foot birdie putt on No. 13.

He reached the par-5 15th in two from 239 yards out and his two-putt birdie pulled him into a tie for the lead. Grace then pulled his tee shot into the water at the short par-4 17th, hit his third shot into the bunker after a penalty and took a bogey, giving Fowler a one-shot lead.

Fowler drove the green on the 336-yard 17th and two-putted for birdie to stretch his lead to two shots.

The drama didn’t end there.

Grace got up-and-down for par from short right of the 18th green, finishing at 15 under after a 2-under 69.

Fowler pulled his tee shot on 18 left, landing in the tall grass between the church pew bunkers. He hacked the ball out short of the green and got up-and-down for the long-awaited victory.

“I think he’s going to get more out of something like that, showing resilience and coming back like that, as opposed to going out there and winning by four or five,” said Justin Thomas, who finished third, three behind Fowler after a 72.

Maybe in the future. Right after the round, Fowler was wiped out after the emotional roller coaster.

“I never want to go through anything like that again,” he said. “That was not fun.”