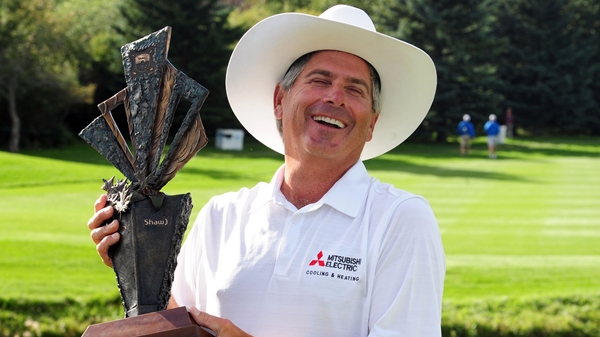 Couples chipped in for eagle from the back of the green of the par-5, 18th hole to set a new course record of 9-under 61.

Andrade then tapped in a short putt for an eagle on the 18th to card an 8-under 62 to pull into a tie with Couples at 15 under through three days of competition.

The pair then went back to the 18th tee for the playoff. Andrade went for the green in two and pulled his second shot right of the green and into the stands. After laying up, Couples chipped his third shot to within a foot of the hole.

After taking a drop, Andrade’s chip shot came up about 30 feet short of the hole. Andrade then missed his long putt to the left of the hole, before Couples tapped in his birdie putt and received a loud ovation from the large crowd surrounding the 18th green.

Steve Lowery and Joe Daley finished in a tie for third at 13 under, while Wes Short. Jr. shot a final round of 64 to earn sole possession of fifth place at 12 under.

Rod Spittle of Niagara Falls, Ont., carded a final round of even par to finish as the low Canadian in a four-way tie for 47th spot at 3 under.

Victoria’s Jim Rutledge finished one shot behind Spittle after shooting a 5-under 65 on the final day of the Champions Tour event.

Meanwhile, Calgary’s Darryl James shot a respectable 69 on Sunday, but still finished in second last at 8 over.