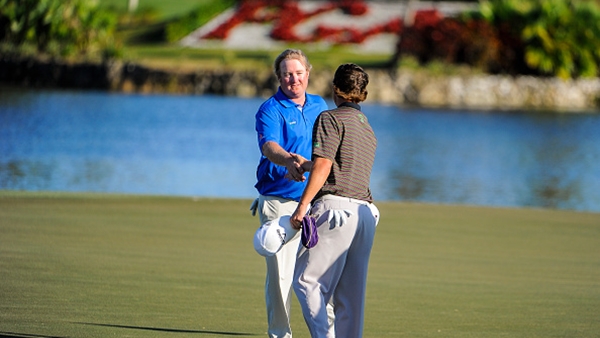 Palm Beach, Fla. — Brad Fritsch carded his third consecutive round of under par golf at the final stage Web.com Q School, firing a 6-under 65 in the fourth round to stretch his lead to six strokes.

The Ottawa resident picked up where he left off after a 65 in the previous round, birdying three of his first four holes Sunday before adding five more on the back nine, including a pair on Nos. 17 and 18.

Fritsch appears to be firing on all cylinders this week, after a sluggish performance during the Web.com Fall Series that saw the 37-year-old miss two cuts.  He is 20-under for the week.

Kentucky’s Rick Cochran III remains in second with a 3-under 69 on Sunday, one stroke ahead of Arizona’s Ted Purdy.

Ted Brown of Peterborough, Ont. improved 19 spots with a 4-under 67 on the Champion course.   He is tied for 13th with six other golfers, including Georgia’s Mark Silvers, who jumped 68 spots with an incredible 10-under 62 Sunday.

Calgary’s Ryan Yip improved 22 spots with a 5-under 67 on the Fazio course and moved into a tie for 95th with Victoria’s Cory Renfrew, who dropped 9 spots after shooting a 71.

A fourth round 80 from Ryan Williams saw the Vancouver native drop 70 spots into a tie for 114th overall at 5-over for the week.