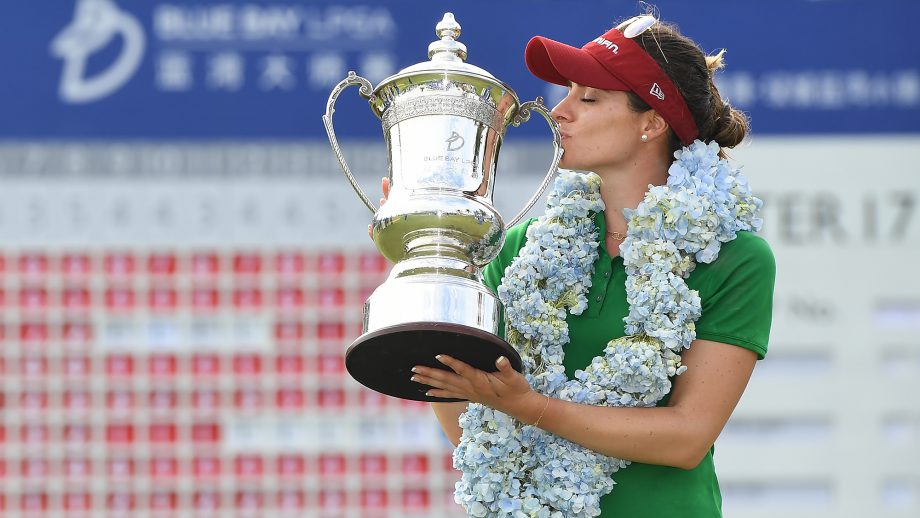 HAINAN ISLAND, China – Gaby Lopez won her first LPGA Tour event with a 1-over 73 to finish one shot ahead of Ariya Jutanugarn in the Blue Bay tournament in China.

Lopez had bogeys on the last two holes at the Jian Lake Blue Bay Golf Club on Saturday and almost let the title slip away. She finished at 8-under 280.

Playing in a group with Lopez, No. 1-ranked Jutanugarn had a birdie on the final hole to also finish on 73.

Celine Boutier shot a 66 and finished two shots off the lead.

Lopez is the first winner from Mexico since Lorena Ochoa, a driving force for the game in that Latin American country.

“I mean, she’s been my inspiration my entire life,” Lopez said of Ochoa. “That’s why I’m actually a professional golfer.”

Ochoa was the LPGA’s top-ranked golfer for several years until she retired in 2010. She won 27 LPGA Tour events.

Lopez said she was also thinking of her grandfather, Jose Lopez, who died recently.

“I always told him that I was going to give him my first trophy,” Lopez said. “Sadly I didn’t, but he was with me all week long and I couldn’t be more lucky, more fortunate to have him still alive in me.”

Jutanugarn played the last two rounds with Lopez and was happy for her – even in defeat.

Lopez turned 25 on Friday and had a hole-in-one in the third round, which turned out to be the difference.

The tournament wrapped up five straight weeks of play for the LPGA in Asia.