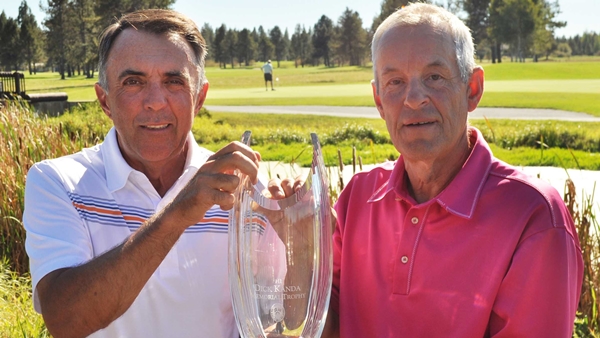 Sunriver, Ore. – John Gallacher of Burnaby, B.C. and Gudmund Lindbjerg of Port Moody, B.C. posted a 5-under par 66 to come from behind and win the 32nd Pacific Northwest Men’s Senior Team Championship held at Sunriver Resort. The 54-hole championship was held on the resort’s Woodlands and Meadows courses and was conducted by the Pacific Northwest Golf Association (PNGA).

The duo of Gallacher and Lindbjerg began the day one shot behind second-round leaders Charles Griswold and Don Orrell, both of Bend, Ore., and posted their bogey-free round in the Four-Ball format on the resort’s Meadows Course for a three-shot victory. Griswold and Orrell finished tied for second.

Gallacher and Lindbjerg had seized an early lead after round one, which was held on the resort’s par-72 Woodlands Course, with a 7-under par 65 in the Four-Ball format. They struggled the second day in the Chapman format, finishing with a 1-over par 72 on the resort’s par-71 Meadows Course. But all scores were higher under the Chapman format, so they didn’t lose much ground.

“John and I have played many years in best-ball events,” Lindbjerg said. “So we know how to do that. It’s difficult to play Chapman. It gets a little confusing.”

Gallacher and Lindbjerg have played as a team in this championship for more than a decade. “We always play to win,” Lindbjerg continued. “And were finally able to finish it this year.”

“You still have to create opportunities for birdies,” added Gallacher. “We’re both pretty consistent off the tee, so that helps (in the Chapman format). But it’s a struggle when you’re playing your partner’s ball and trying not to make things too difficult for him. It’s not alternate shot, but it sure feels like it.”

The Pacific Northwest Men’s Senior Team Championship is one of 16 major, regional, amateur championships for men, women, juniors, and seniors conducted annually by the PNGA throughout the Northwest.