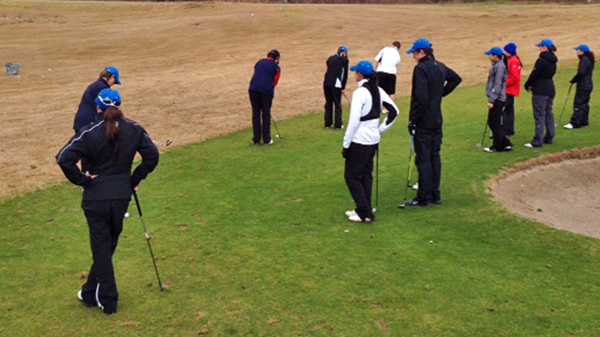 UXBRIDGE, Ont. —  The GAO (Golf Association of Ontario) has announced the rosters of the five regional teams that will comprise Ontario’s under-17 high performance program in 2014-15.

After a very successful regional team pilot program in 2013-14, the GAO is expanding the number of regional teams as well as adding more content to the training programs.  The team members were selected based on their 2014 tournament scores and testing results from Skills Combines held during the month of September.

“We were thrilled with the progress of the 36 athletes that were part of regional team pilot program last season,” says Mary Ann Hayward, GAO Manager of Sport Performance. “Six of those players have advanced to our Team Ontario program for the upcoming season. With the addition of Niagara and Windsor, we will have 60 promising young athletes in our under-17 training program for 2014-15. A new addition to the program this year is a 36-hole regional team competition to be held in the Niagara area in late April. With our skilled personal coaches, dedicated regional coaches and the support of TaylorMade-adidas Golf Canada as our new high performance sponsor, the future of golf in Ontario has never been brighter.”

Team Ottawa is made up of athletes from Ottawa and surrounding areas in Eastern Ontario. Adam Holden coaches the team and Allen Hicks is the team’s strength and conditioning coach. They will train out of the Kevin Haime Golf Centre in Kanata and the Ottawa Athletic Club.

For more information on the team and its players, visit the Team Ottawa page.

Team York covers Toronto and the GTA. Jeff Overholt coaches the team and the strength and conditioning coach is Katie Robinson. Team York will train out of The Golf Lab in Vaughan and Carrying Place G & CC in Kettleby.

For more information on the team and it’s players, visit the Team York page.

Team Waterloo is made up of players from the Kitchener-Waterloo and surrounding area. Mike Martz coaches the team and their strength and conditioning coach is Angella Lee. They will train out of the Golf Performance Centre and Whistle Bear GC in Cambridge.

For more information on the team and it’s players, visit the Team Waterloo page.

Team Niagara is comprised of golfers in the Niagara region, which includes Niagara Falls, St. Catharines and surrounding area. John White coaches the team and the strength and conditioning coach is Wayne Oliver. They will train out of the Legends on the Niagara, in Niagara Falls and winter training will be at TurfNet and Fourth Quarter Fitness in Welland.

For more information on the team and it’s players, visit the Team Niagara page.

Team Essex-Kent is made up of golfers from the Windsor and South Western Ontario area. Randy McQueen coaches the team and the strength and conditioning coach is Ryan Carlone. They will train out of Roseland Golf Club and On The Green Indoor Golf in Tecumseh.

For more information on the team and it’s players, visit the Team Essex-Kent page.