Garcia clings to slim lead over McIlroy at Firestone 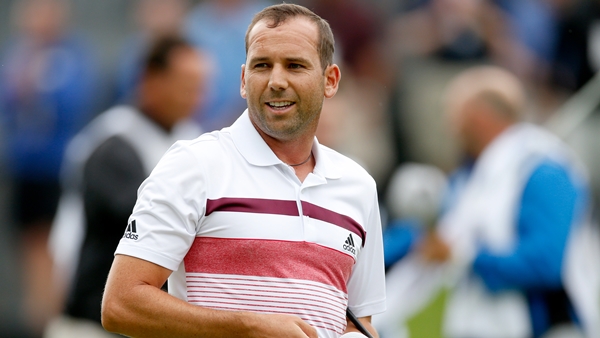 AKRON, Ohio – Sergio Garcia was in the trees left of the 18th fairway, looking through a gap in the branches to find a way out. Ahead of him was Rory McIlroy, giving his 35-foot birdie putt a little body English before it fell for birdie.

Garcia never lost command of the Bridgestone Invitational on Saturday, even after a storm delay of just over three hours. He started with a three-shot lead, stretched it to six shots at one point and closed with three good pars for a 3-under 67, three shots ahead of McIlroy.

The Spaniard just lost a small measure of comfort.

McIlroy, coming off a wire-to-wire win in the British Open, might be the last player anyone wants to see right behind.

“I’ve got to keep doing the same thing, make sure that I have good confidence in myself, that I play nicely, and then see what happens,” Garcia said. “If Rory comes out, or whoever is behind us comes out, and get crazy like I did on Friday, then it is what it is. But hopefully, I’ll be able to play well again and be all the way up there tomorrow.”

McIlroy birdied his last two holes for the second straight day for a 66, and he got his wish – a spot in the final group.

Sunday is set up as a replay of The Open – only with the roles reversed.

McIlroy had a six-shot lead going into the final round at Hoylake. Garcia, playing in the group ahead, made a spirited run at McIlroy and got within two shots late in the round until he faltered and Boy Wonder pulled away.

“Obviously, Rory is playing great, and we get along nicely as of right now,” Garcia said. “I think we’re both excited about it. We’re definitely going to play hard. It will be nice to see if I can do the same thing he did to me a couple of weeks ago. So we’ll see.”

This time, it’s McIlroy who has to chase.

“My goal today was to try and get in the final group,” McIlroy said. “Sergio didn’t quite have that luxury of seeing what I was doing on the last. It will be nice to play alongside him tomorrow and at least keep an eye on what’s going on. Try to apply a bit of pressure when I can, but just really looking forward to getting in there and having another chance to win a tournament so soon after what happened at Hoylake.”

Rickie Fowler also was in the hunt at Hoylake, though he took himself out of the picture on the final hole. He went from the left trees to a plugged lie in the bunker, having to brace his right good against the side of a hill. He left it in the bunker and wound up with a double bogey for a 72, putting him 10 shots behind.

This isn’t a two-man race for a World Golf Championship title.

Marc Leishman had a 68 and was five shots behind, while Adam Scott returned from the rain delay carrying only his long putter, the only weapon he needed to convert one last birdie for a 65 that at least left him with a slim chance. He was six shots behind, along with Keegan Bradley (68) and Justin Rose (70).

The race won’t feature defending champion Tiger Woods. The eight-time winner at Firestone made only one birdie on Saturday – he failed to birdie a par 5 for the second straight day – and shot 72. He was 15 shots behind.

Garcia, who won the Qatar Masters this year, has been building toward moments like this. Two weeks after his runner-up finish to McIlroy at Hoylake, the Spaniard has performed so solidly at Firestone that he went 37 consecutive holes without a bogey. Along with four birdies in 11 holes to start his third round, he built a six-shot lead for a brief moment until missing the 14th green long and failing to convert a 5-foot par putt.

Three pars at the end helped keep in front.

He pulled his lay-up shot on the par-5 16th into deep rough, which felt even thicker after the rain delay. Garcia managed to judge it perfectly to clear the water. He hooked his tee shot on the 17th hole and hit 8-iron safely onto the green. The biggest challenge was the 18th, where he had to clear trees with a shot from the rough. He opened up the face of a 7-iron to play a big cut with such elevation, and it cleared the back bunker, leaving him 75 feet away.

“Where I hit it, I couldn’t really do much more than that and hope to make a good two-putt,” he said.

He lagged it down to 5 feet, and lightly pumped his fist when it fell. Every shot matters, especially with someone like McIlroy right behind him.

“The one on 18 is the one that felt the best,” Garcia said, “because it was probably the toughest to make par.”