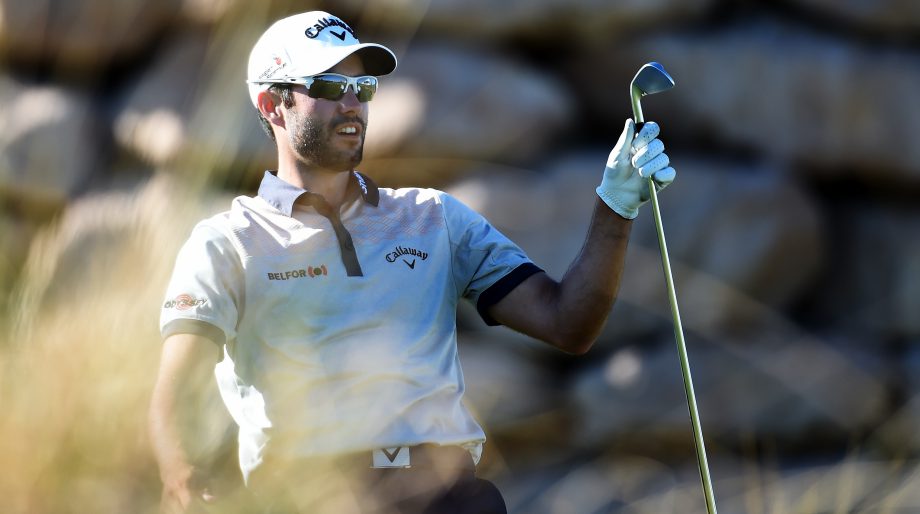 LAS VEGAS – One long putt got Lucas Glover going Saturday and put him in position for his first PGA Tour victory in five years.

Glover was even par for his round when he holed a 45-foot birdie putt on No. 8, followed with a 9-foot eagle putt on the next hole and made a pair of birdies and a key par putt in the closing holes for a 6-under 65 in the Shriners Hospitals for Children Open.

“That eighth hole was kind of the catapult,” Glover said. “I made that long one, and two great shots into 9 and turned in 3 under and kept it going.”

Playing in the final group, Koepka and Pampling were slowed by mistakes and wound up letting a dozen or so players back into the mix. Twenty players were separated by four shots going into the final round at the TPC Summerlin.

“We’ve got a shootout ahead of us tomorrow,” said Glover, who was at 15-under 198. “I like where I stand, but you’re going to have to play good tomorrow.”

Glover pulled ahead when he got up-and-down on the short par-4 15th, two-putted from birdie from about 50 feet on the 16th hole and then made a 5-foot par putt on the par-3 17th. The short putts are what has hurt Glover the most during the five years since the former U.S. Open champion last won at Quail Hollow.

He recently switched to a claw grip to get his shoulders more involved.

“I’ve really been working hard, and it’s starting to pay off,” Glover said. “Eighteen holes tomorrow, and see how many we can make because I’m going to have make some.”

Russell Henley made eight birdies – only one of them from under 10 feet – for a 63, and Geoff Ogilvy ran off four straight birdies late in his round for a 65. They were two shots behind. The group at 12-under 201 included Las Vegas resident Scott Piercy, Harris English and Pat Perez, who missed eight months this year with shoulder surgery. Another Las Vegas resident, Ryan Moore, was in the large group at 11 under.

Koepka had three bogeys on his opening six holes to fall behind, and he caught up by using his power to make birdie on the par 5s on the back nine and with a 3-wood that he hit to 20 feet for a two-putt birdie on the 15th. He was tied for the lead until pulling his tee shot into the water on the 17th and making bogey, and then he ended his wild round with a sand wedge that spun back to tap-in range on the 18th.

“For as bad as we played today, I was kind of happy to be one off the lead,” Koepka said. “Just kind of struggled with everything. I feel like speed was a bit off, putting never really got comfortable. … Not my best performance, but I guess one off the lead isn’t too bad for how bad we played.”

The final group of Pampling, Koepka and Chris Kirk (75) combined to shoot 3-over par.

“We struggled out there, and at least it was good see Brooks make some birdies at the end,” Pampling said. “They were out there. It was just a few breaks here and there weren’t quite what I had been getting. Hopefully, it’ll turn around tomorrow and we’ll actually post a proper number again.”

Pampling and Glover both had to go back to the Web.com Tour Finals two seasons ago to regain their full tour cards. While it has been since 2011 that Glover last won, Pampling hasn’t won since the 2008 Australian Masters, and his last PGA Tour victory was 10 years ago at Bay Hill.

“I’m not going to lie, there was a little bit of tension early on,” Pampling said. “They guys who are a long way back go low because they’re not protecting a little bit. Obviously, I don’t think we can protect tomorrow, but I feel good. Just go out there and let it go and just hope juices are good. It’s nice to have them.”