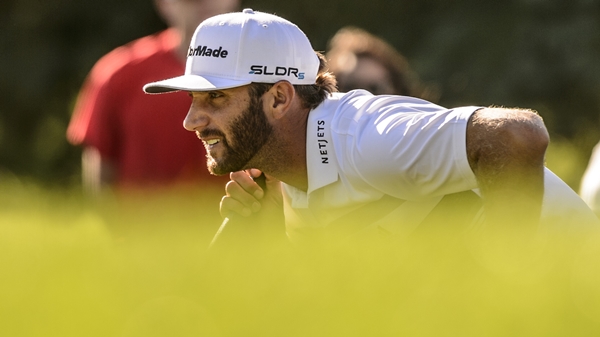 NEW YORK – Dustin Johnson says in a magazine interview that cocaine is not the reason he chose to sit out the last six months to get his life in order.

“I did not have a problem,” Johnson told Sports Illustrated when asked about cocaine. “It’s just something I’m not going to get into. I have issues. But that’s not the issue.”

The interview was the first for Johnson since he took his leave of absence. He missed the final major, the FedEx Cup playoffs and the Ryder Cup. He is not expected to return until his fiancé, Paulina Gretzky, has their first child. She is due within the next month.

Johnson is an eight-time winner on the PGA Tour.

He said he didn’t go to rehab during his break from golf, instead hiring a team of experts, such as a life coach, to help him understand how to get the most out of his talent. Johnson is regarded as one of the best American players and the most athletic.

He said he learned he didn’t handle stress the right way.

“My way of getting rid of it was drinking or partying,” he told the magazine. “Yeah, that might work for that day or the next week, but eventually everything keeps piling up.”

Johnson said he has gone months without vodka, which had been his vice. He put down $1,000 in a bet with his prospective father-in-law, hockey great Wayne Gretzky, and other members of Sherwood Country Club to see who could go through January without drinking.

“I don’t miss waking up with a hangover, and I didn’t drink very often,” he said. “It was just when I did it was a little too much.”

Johnson is said to have a course-record 61 at Sherwood in Thousand Oaks, California – twice in three days – and Gretzky said he senses that the 30-year-old from South Carolina is eager to return to golf and realize his potential. Johnson said he is trying to simplify his life, especially with a baby on the way.

“Over these past four or five months I’ve really grown up, and I am starting to become the person I want my kids to look up to,” he said.