Gomez clinches second Personal Classic title in as many years 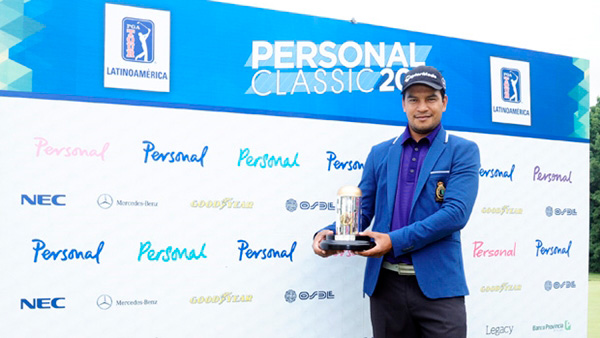 Buenos Aires, Argentina — Fabian Gomez has become the first ever multiple champion of the PGA Tour Latinoamérica Personal Classic, capturing the title for the second straight year by a total of seven strokes.

The Argentinian accomplished the feat with a staggering 10-under 62 in his final round, fueled by two eagles and seven birdies.

Originally scheduled as a four-day tournament, the event was postponed and ultimately shortened to 54-holes after a storm passed through the Lujan area Saturday, completely saturating the course.

Gomez’s compatriot Gustava Acosta, who began the 3rd round with a one-stroke lead after carding a second-round 62, could not keep pace with his countryman and finished as the runner-up at -17.

Derek Gillespie of Oshawa, Ont. had the best finish amongst Canadians in Argentina. The Big Break PEI winner finished in a tie for 34th at -6 (210).

Calgary’s Chris Baryla who got off to a tremendous start this week by carding an opening round 65, failed to build momentum and finished T46th at 3-under 213.

Robbie Greenwell of Georgetown, Ont. finished 57th at 5-over 221.