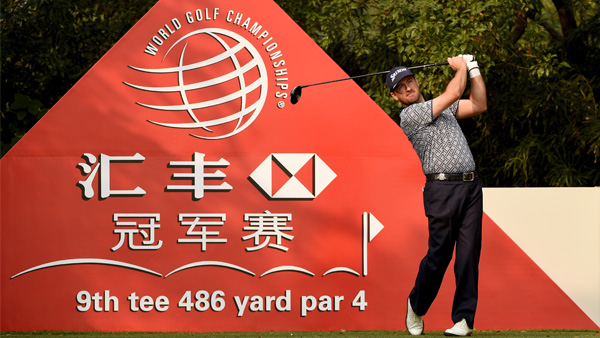 SHANGHAI — Graeme McDowell typically looks at the leaderboard more often at the start of a tournament. It gives him a sense of how the course is playing and what score he might need to contend at the finish.

There was no need to look Thursday in the HSBC Champions.

McDowell noticed ankle-deep rough at Sheshan International and fairways not as wide as usual. He felt firm greens and saw trees jostling in stiff wind. More than anything, he kept looking at all the birdies that filled his scorecard.

McDowell already had seven birdies when he finished his 12th hole, and a couple of loose mistakes at the end of the opening round didn’t diminish his satisfaction. He opened with a 5-under 67 on a tough day in Shanghai to build a two-shot lead.

“No, I didn’t need a leaderboard to let me know that 7 under through 12 is fairly strong,” McDowell said. “Gauging what’s a good score can be a good thing maybe when you’re not going well. But it might not be a great thing if you’re taking it deep and the rest of them are 3-under par and you’re thinking, `Whoa, this is a very good score.'”

That’s not what slowed him. Trouble was lurking everywhere, and not even McDowell was immune.

Rickie Fowler also started quickly with three birdies in his opening five holes, only to spend the rest of the round trading birdies with bogeys. He wound up with a 69, along with U.S. Open champion Martin Kaymer, Brandt Snedeker, Chris Kirk, Tim Clark and Tommy Fleetwood.

Jordan Spieth began his new PGA Tour season with two straight bogeys and had to save par with a long bunker shot on his third hole. He scratched his way back and wound up in a large group at 70 that featured Lee Westwood, Ian Poulter, Adam Scott and Henrik Stenson, who made bogey from the bunker on his final hole.

It didn’t take much for players to stumble. FedEx Cup champion Billy Horschel made two double bogeys, only one birdie and shot an 80.

“This is a top event – some of the best players in the world, probably the best field you’re going to get in Asia, and you don’t want it to be a pushover,” Fowler said. “You want a good, solid test. And it’s showing that.”

Only 27 players in the 78-man field broke par, compared with 37 players under par on the first day last year when the winning score was 24-under 264. McDowell said he wouldn’t be surprised to see something around 10 or 12 under win, even if the wind lets up.

McDowell is the only player this year to finish in the top 10 at all the World Golf Championships, and while he hasn’t captured a WGC title, Sheshan International would seem to favor him more than the others. Thursday was his 10th consecutive round in the 60s on this course.

“A big key to this golf course is driving the ball well. I drove it very well today,” McDowell said.

The exception was on the 603-yard eighth hole, playing with the wind. McDowell hit a 3-wood to avoid the bunker on the right side of the fairway, and he put it in the deep grass for the first time all day. He could only manage an 8-iron out of the rough and still had 215 yards over the creek fronting the green. McDowell pulled that left of the green and failed to get up and down.

No complaints. He did not forget the 20-foot birdie putt he made on No. 14, or the 45-foot putt he holed across the green at the 17th, or the 25-foot birdie on No. 3. And then there was his drive on the 288-yard 16th, a perfect yardage to go with a perfect swing that gave him a two-putt from 15 feet for birdie.

“There were some tricky holes on the front nine,” McDowell said. “I made a couple of putts I should have in the first 12 holes, and then I made a couple of bogeys that I shouldn’t have coming in. All in all, I think 5 under was a fair representation of my round.”

Canada’s Graham DeLaet had to withdraw after a 45 on nine holes because of a neck injury. The Canadian also withdrew from Malaysia last week with a sore neck.