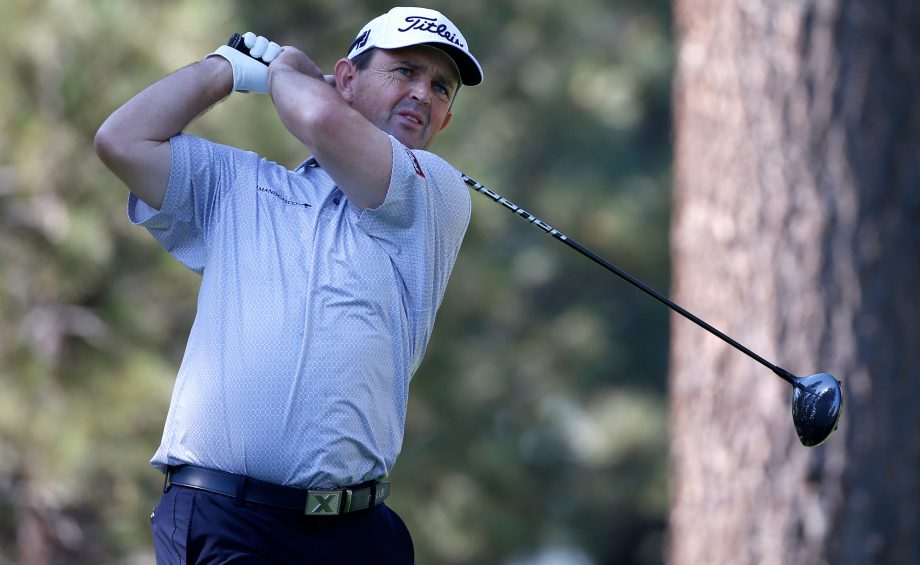 The 42-year-old Australian had a 10-point round to reach 24 points at Montreux in the scoring system that awards eight points for double eagle, five points for an eagle, two points for a birdie and deducts a point for a bogey and three points for a double bogey or worse.

“I played OK,” Chalmers said. “It wasn’t as good as yesterday ball-striking-wise, but then I ran in a lot of really nice putts. … I stayed out of trouble on the holes I needed to and picked up some really good birdies where I needed to.”

Chalmers has only conditional tour status. He has made six starts this season on the PGA Tour, tying for 58th in the first in China in November and missing the cut in the last five. The two-time Australian Open and Australian PGA champion also has played in nine Web.com Tour events.

First-round leader Martin Laird of Scotland bogeyed three of his last six holes – finishing with a three-putt on the par-4 ninth – to drop into a tie for second with 2013 winner Gary Woodland. Laird also had five birdies in a seven-point round. Woodland had eight points with five birdies and two bogeys.

“Yesterday morning the greens were immaculate. If you hit a good putt, it was pretty much going in,” Laird said. “This afternoon, I hit two or three putts from 6 to 10 feet, felt like I hit good putts, and they wiggle around and miss. Same for everyone that plays in the afternoon. It’s just kind of the nature of these greens. Hopefully, I can have some wiggle in the next couple of days.”

Chalmers, Laird and most of the players are fighting for a spot in the British Open in two weeks at Royal Troon in Scotland. Because of the West Virginia floods that led to The Greenbrier Classic being canceled next week, a spot was transferred to the leading player not already eligible at Montreux.

“Obviously, it would be great,” Laird said. “It’s always nice for me to go back to Scotland. The Open’s my favorite golf tournament in the year. .. But it’s not really on my mind right now. I’m just trying to play good golf and keep firing away at flags and, hopefully, make some birdies.”

Woodland was one of five players already in the Open to advance to the weekend.

Colt Knost was fourth at 21 after an eight-point round.

“A lot of good and a lot of bad, honestly,” Knost said. “Yesterday, I really wasn’t happy with my ball-striking. And today, I thought I found something on the range. I hit some better ones, but kind of still a little sloppy. But it definitely plays tougher here in the afternoon and the greens get a little bumpy.”

He recently moved from Dallas to Scottsdale, Arizona.

“I was out there all winter just working on my game out at Whisper Rock and decided to make the move permanent,” Knost said. “It just really allows me to focus on golf and everything. I think it’s a big reason why I’m playing so well this year.”

“It’s always good to have an eagle anywhere in your round, but definitely nice to finish with one,” said Steele, already in the British Open. “It’s nice that they gave us a hole like 18 to finish on. It really makes it exciting for the fans and fun for us.”

Former Illinois player Charlie Danielson had 11 points in his professional debut. He eagled the 18th for the second straight day.

Graham DeLaet struggled to follow his nine-point opening round in his return from a five-week break to sort out anxiety issues with his putting. The bearded Canadian closed with a double bogey, leaving him with eight points heading into the weekend. Fellow Canadian Nick Taylor of Abbotsford, B.C., who sits T68 with seven points, will also advance to the weekend.

Camilo Villegas, tied for second with 14 points Thursday, lost seven points with two double bogeys and a bogey to make the cut on the number.

Jon Rahm and 2014 winner Geoff Ogilvy also had seven points. Rahm tied for third last week at Congressional in his pro debut to earn a British Open spot. The former Arizona State player is from Spain.