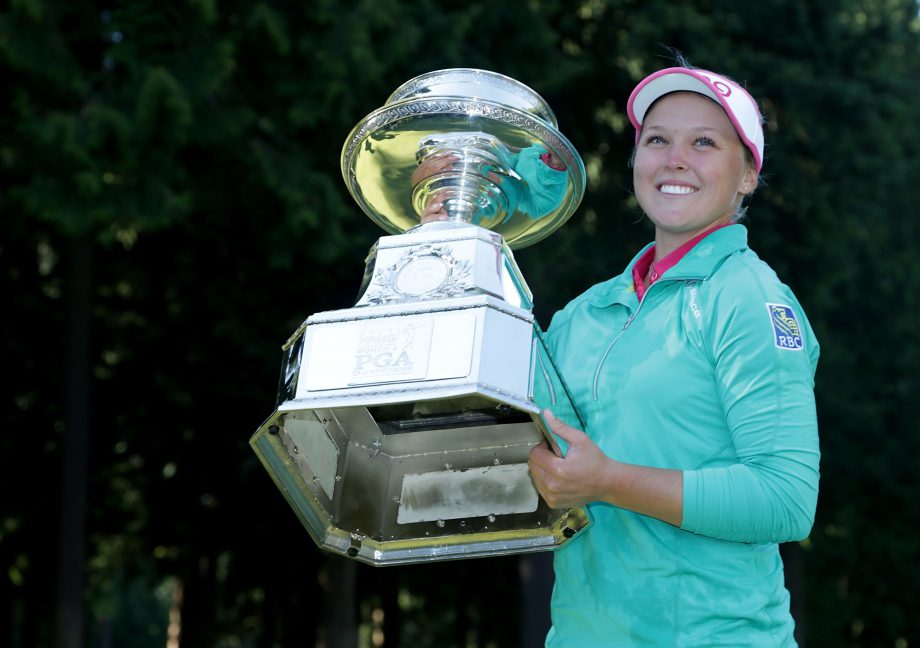 Click below to listen to our media teleconference with Brooke Henderson.

SAMMAMISH, Wash. – Canada’s Brooke Henderson beat top-ranked Lydia Ko with a birdie on the first hole of a playoff Sunday in the KPMG Women’s PGA Championship after overcoming a three-shot deficit on the back nine.

In the playoff on the par-4 18th, Henderson hit her second shot from 155 yards to 3 feet, while Ko’s second from farther back in the fairway left her with 20 feet. Ko missed to the left, and Henderson tapped in to cap a week that started with a hole-in-one on her fourth hole of the tournament and ended with a major championship.

In regulation, Henderson saved par on 18 with a 12-footer, moments before Ko missed a 4-foot birdie try on the par-3 17th. Henderson also made a long eagle putt on the par-5 11th and birdied the par-3 13th. She won last year in Portland, Oregon, for her first tour title.

Henderson became the second-youngest winner in a major championship, with Ko the youngest last year in the Evian Championship in France. Henderson also ended the 19-year-old Ko’s bid for her third straight major victory.

Ariya Jutanugarn, in search of a fourth straight victory, shot a 66 to finish a stroke back. The 20-year Thai player missed a birdie putt on the 18th that could have put her into the playoff.

Henderson, the first-round leader after a 67, began the day at even par – two strokes behind Ko – after consecutive rounds of 73. The Canadian pulled off the comeback with a perfect back nine after going out in 2 under. Henderson’s eagle at the 11th was just the third at the long par 5 all week and separated her from a large pack at 2 under. Ko answered with a birdie at the 11th, but Henderson drew another huge roar with a birdie at the 13th to stay one shot behind.

The 17th also made the difference for Ko. After hitting a perfect tee shot, Ko left her short birdie putt out to the right and missed the chance to take a one-shot lead to the final hole. Ko missed a lengthy birdie putt the first time playing the 18th.

“I’m happy with the way I played. I just got outplayed,” Ko said. “For Brooke to shoot 65 on the final day at a major, at a course like this is very impressive.”