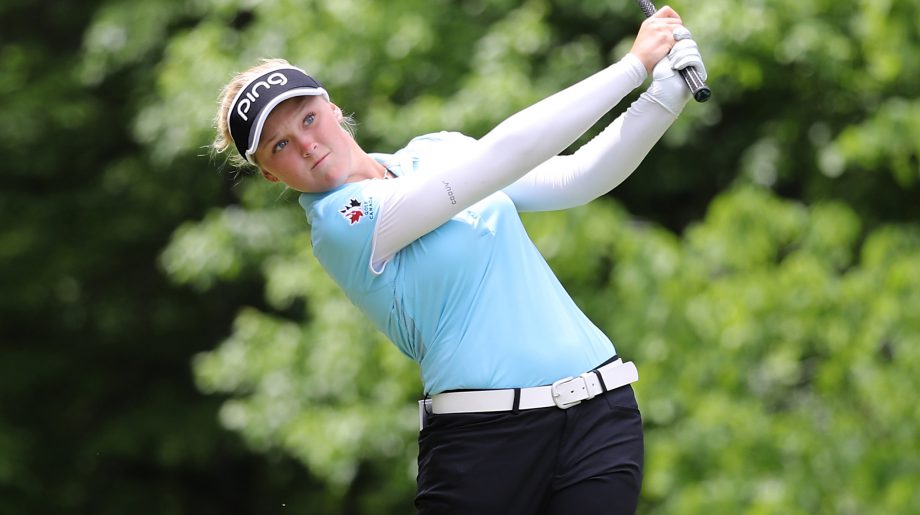 ANN ARBOR, Mich. – Ariya Jutanugarn tore her scorecard into pieces after walking off the 18th green at Travis Pointe, proving the competition isn’t the only thing she is tearing up.

Jutanugarn moved a step closer to winning a third straight LPGA Tour title by shooting a 4-under 68 on Friday to take a two-shot lead in the Volvik Championship.

She had four back-nine birdies, including No. 18 when her approach went off a hospitality suite and landed in a greenside bunker 20 yards from the hole.

As Jutanugarn dug her heels into the sand, it sounded as if a spectator dropped something in an elevated viewing area just behind her. She stepped away from the ball, then addressed it again. Clearly unfazed, she blasted out of the bunker well enough to set up a 1-foot putt that pushed her to 11-under 133.

The 20-year-old Jutanugarn is coming off a win at the Kingsmill Championship in Virginia after becoming the first Thai winner in tour history at the previous tournament in Alabama. She insisted a third straight title isn’t on her mind.

Second-ranked Inbee Park, who withdrew Thursday with a thumb injury, was the last LPGA Tour player to win three straight tournaments in 2013.

Top-ranked Lydia Ko was 2 under after her second straight 71.

Unlike some of the other top players, Jutanugarn doesn’t have a driver in her bag this week.

The powerful player simply doesn’t need it, outdriving people in her group with 270-yard shots with a 2-iron or 3-wood. Her touch around and on the greens are appear to be superior.

Usually, she keeps an eye on the leaderboard. On Friday, though, she didn’t.

If Jutanugarn puts up another low score after her 65-68 start, the remaining field may be relegated to vying for second place.

Kim opened with a 64 for a one-shot lead over Jutanugarn.

Alex pulled into a first-place tie in the morning with her fourth birdie on the front nine, playing a steady game that included hitting the fairways and greens and making the most of opportunities on makeable putts such as the 4-footer on No. 9.

The 163rd-ranked player in the world missed the cut in her first four tournaments this year and hasn’t finished better than ninth in her career.

“There’s really no expectations for the weekend,” she said.

Michelle Wie wasn’t close to the 2-over cut, going 8 over with two 76s. She has missed two straight cuts and three of four and six this year.

Ryu, meanwhile, is one of the many South Koreans having a great year. She tied for 10th at her last two tournaments, was fifth at an event a month ago and has four top-10s in her last six starts.

“I was so close to winning the last three tournaments, the final round wasn’t good enough to get the trophies so I was really disappointed in myself,” she said. “But the good thing is, I just kept in contention, just kept fighting. I really want to hold this and I really want to keep my positive mind until Sunday.”

A 5-under 67 performance saw Smiths Falls, Ont., native Brooke Henderson climb into a tie for tenth place. Samantha Richdale of Kelowna, B.C., is T37 at 1-under, while Anne-Catherine Tanguay of Quebec City sits T58. Hamilton’s Alena Sharp will not advance to the weekend. Sherbrooke, Que., product Maude-Aimée LeBlanc was forced to withdraw.