Henderson falls to Gillman at US Women’s Amateur 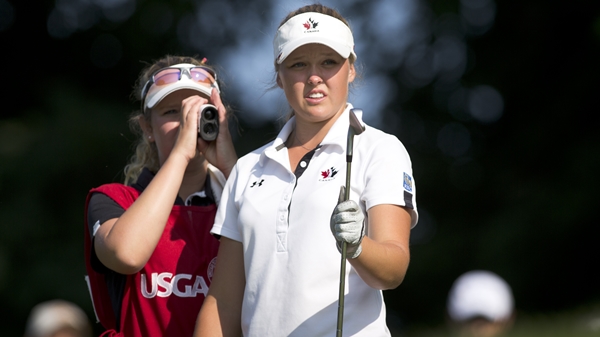 Gillman took the lead with a birdie win on the par-5 33rd, matched the 16-year-old Henderson with pars on the 34th and 35th holes and took the par-4 18th with a birdie.

Gillman, coming off an 11-stroke victory last week in the Junior PGA Championship, is set to attend the University of Alabama in 2016.

Henderson failed in her bid to become the third Canadian winner in tournament history. Marlene Stewart accomplished the feat in 1956, and Cathy Sherk did it in 1978.

“I played well today, and I held the lead after the first 18,” said Henderson after her round.  “I just didn’t play quite as well on the back 18 as I would have liked.  Kristen played really well and she made a lot of putts when she needed to.”

The loss was emotional for Henderson, but the Team Canada member has a lot of reasons to smile after the strong finish.

Henderson will likely move to No. 1 in the World Women’s Amateur Rankings next week.