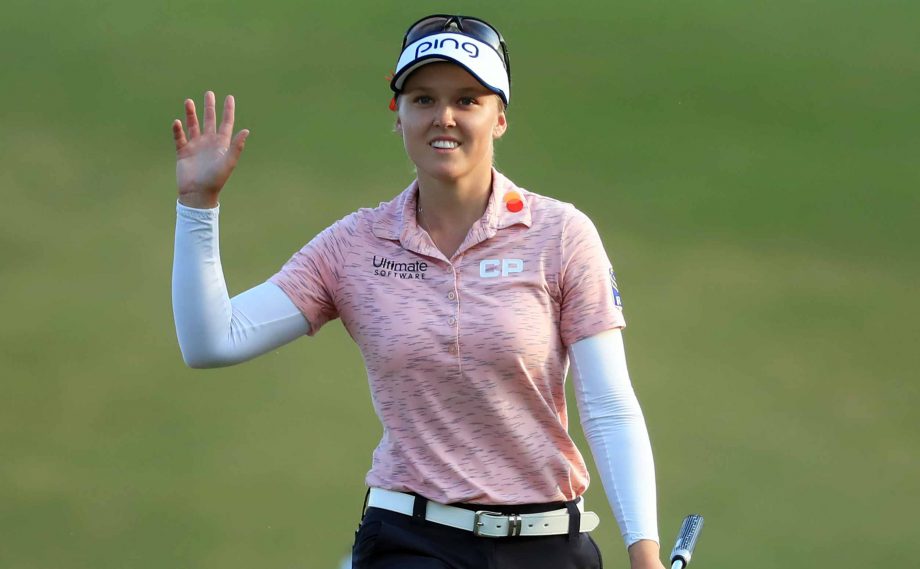 WILLIAMSBURG, Va. – Bronte Law was scuffling, missing fairways off the tee and scrambling for pars while a host of challengers tried to play catch-up.

“It was definitely a relief,” she said after winning the Pure Silk Championship on Sunday for her first career LPGA Tour victory.

“I’d hit a really good putt on the previous hole before and it kind of hit a spike mark,” she said about her sixth consecutive par. “I thought it was middle centre and didn’t make that one.”

The 24-year-old Englishwoman, a former star at UCLA, held a share of the lead after all four rounds and finished with a 17-under 267 total on the River Course at the Kingsmill Resort.

Law, who came from 10 shots back on the last day to get into a playoff in the LPGA Mediheal Championship three weeks ago in Daly City, California, doubled her lead with the birdie on No. 16. Two-putt pars on the last two holes capped the victory in her 56th career start.

“It feels surreal to be honest after coming so close,” she said.

It is also, she said, a nice way to finish the week leading up to the U.S. Women’s Open next week in Charleston, South Carolina.

After the close call, “to be in contention and (for it) to be that very next time out playing was really cool and shows me that I can compete at the top on a weekly basis, which is the whole goal out there,” she said. “This was the perfect way to prepare, I guess.”

Sagstrom’s approach to the par-4 18th hit the flagstick, bounced straight down and then bounded well away. She then two-putted, preserving Law’s lead.

While her ball was in flight. Sagstrom said, she was thinking, “Oh, that looks really, really good. Then I heard it hit and I was like, ‘Please don’t bounce off.’ I was like, I mean, I couldn’t hit it more perfect.

“I was excited about the shot anyway.”

Wei-Ling Hsu, who had an eagle, seven birdies, two bogeys and a double bogey in a 66, finished fifth.

Law got a nice break on the par-4 eighth hole when she hit her drive well right, but it bounced off a steep slope back into the centre of the fairway. She hit her approach to 6 feet and made it to lead by three, then hit three more drives well right, but lost just one shot.

Sagstrom, also seeking her first career victory, got within one at No. 15 with a birdie, but missed makeable birdie putts on the next two holes before the bad luck on the finishing hole.

Henderson was a non-factor for most of the day, with 14 pars and one birdie in her first 15 holes before birdies at Nos. 16 and 18.

“To shoot 3 under on a Sunday and be that close to the leaderboard and know that you left some out there is a good thing,” she said. “So definitely just looking forward to the rest of the summer.

“I think this was a good way to lead into the U.S. Open next week.”

Hataoka, who lost here in a playoff with Ariya Jutanugarn last year, also climbed into tie for second-place tie with a closing birdie.

Hsu at one point climbed into a share of second, but the par-5 15th, which she had eagled the last two days, ended her bid. She hit her second shot right of the green and well past _ out of bounds _ and eventually two-putted for a double bogey. She birdied Nos. 16 and 18.

Cristie Kerr, the only three-time champion, had the top round of the week, coming within one shot of the course record with a 63. She just missed a birdie putt at the par-4 18th to finish at 11 under.