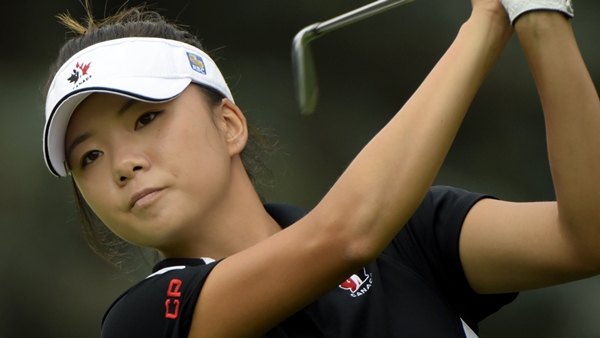 LONDON, Ont. – The role models Canadian golfers need are all around them at the Canadian Pacific Women’s Open.

For 20-year-old Jennifer Ha of Calgary, one of them is 16-year-old star Brooke Henderson. Ha and Henderson are roommates this week and were the only two amateurs to make the cut.

After three rounds, Ha is still chasing Henderson to be the low Canadian and the low amateur after shooting a 1-over 72 Saturday to drop to 2 under for the tournament. Henderson, from Smiths Falls, Ont., shot a 71 to get to 4 under.

“Brooke’s unreal and she’s No. 2 in the world (among amateurs), so it’d be great if I got a chance to catch up her,” Ha said.

Henderson got to play with one of her role models in 19-year-old Lexi Thompson, who was a teenage golfing phenom at the age of 12. Unprompted, Henderson glowed about playing with Thompson.

“It was a lot of fun being able to play with Lexi today,” Henderson said. “Lexi I’ve always looked up to. She’s definitely a big person in the women’s game and someone that you can look up to and I definitely have.”

Henderson, who again attracted the biggest fan support at London Hunt and Country Club as the most prominent Canadian name in the field, called Thompson one of her idols.

“Just being able to watch her and learn a little bit from her, it was fun,” Henderson said. “I talked to her a little bit today. I asked her a few questions and got a few things answered that I wanted to know.”

Henderson also noticed Lorie Kane following her for the final five holes of her round. The 49-year-old Kane has offered plenty of advice to Henderson during her blossoming stardom.

“She is a huge role model for me,” Henderson said of Kane. “A lot of the women out here are like that. They are really nice and they support young people.”

Four Canadians made the cut, though Henderson was the only one to shoot under par Saturday. Jennifer Kirby (Paris, Ont.) shot a 76 to drop to 1 under for the tournament, and Sue Kim (Langley, B.C.) shot a 74 to move to 1 over.

Ha would have been even par had it not been for a bogey on the 18th hole. But she was happy to be able to get her game together after being 3 over through six.

The Kent State University student returns to school in Ohio next week but is spending this weekend honouring football player Jason Bitsko, who was found dead in his off-campus apartment Wednesday. Ha has 54 – Bitsko’s number – written on each of her golf balls.

Coming into the tournament, Ha’s goal was simply to make the cut. Now that she has, she can set her sights on competing with Henderson and remembering Bitsko, the Golden Flashes’ starting centre who the school said died of an undetermined medical issue at the age of 21.

“I think my main goal right now is just to have the time of my life, Ha said. ”It would be unreal to finish as the low amateur, but I’m out here to have fun for this week and to honour Jason.“

Henderson also pegged making the cut as a pre-tournament expectation and now wants to “climb the leaderboard.”

“Today, 1 under, I didn’t back up, but I don’t think I moved forward too much,” Henderson said. “So tomorrow’s going to be a big day.”