Henderson headed to final of US Women’s Amateur 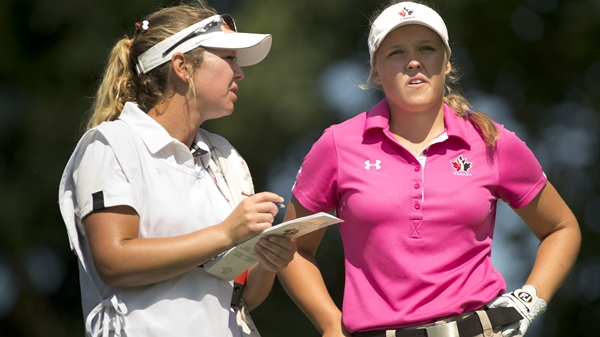 The 16-year-old Gillman, Austin, Texas, beat 15-year-old Andrea Lee of Hermosa Beach, California, 4 and 3. Henderson, the 16-year-old Canadian who is No. 2 in the world amateur ranking, edged 16-year-old Hannah O’Sullivan of Paradise Valley, Arizona, 1 up.

“It feels awesome,” Gillman said. “Coming into this week that’s all you wanted. It feels great to accomplish that.

Gillman is coming off an 11-stroke victory last week in the Junior PGA Championship.

“It helped me a lot about all the momentum and just the confidence I had in my game,” Gillman said.

Henderson, from Smiths Falls, Ont., is trying to become the third Canadian winner in tournament history, following Marlene Stewart in 1956 and Cathy Sherk in 1978.

“It’s amazing. I’m really excited to play tomorrow,” Henderson said. “As I said earlier, I still have a lot of work to do. It’s exciting to be in the final. Best finish previous to this week was round of 32, so it’s great to have a chance to win and contend for the title.

“Definitely going to play my game, be smart about decisions. Match play is really different from stroke play. You’ve got to be really careful and smart.”

Henderson overcame an early two-hole deficit. She took the lead with a birdie win on the par-4 14th and matched O’Sullivan with pars on the final four holes.

“She was playing really well,” Henderson said. “She’s a great player and she has a great future ahead of her. It was a lot of fun out there. I made a couple mistakes early that got me 2 down, but I was able to fight back, and that’s really key to learn how to do that.”