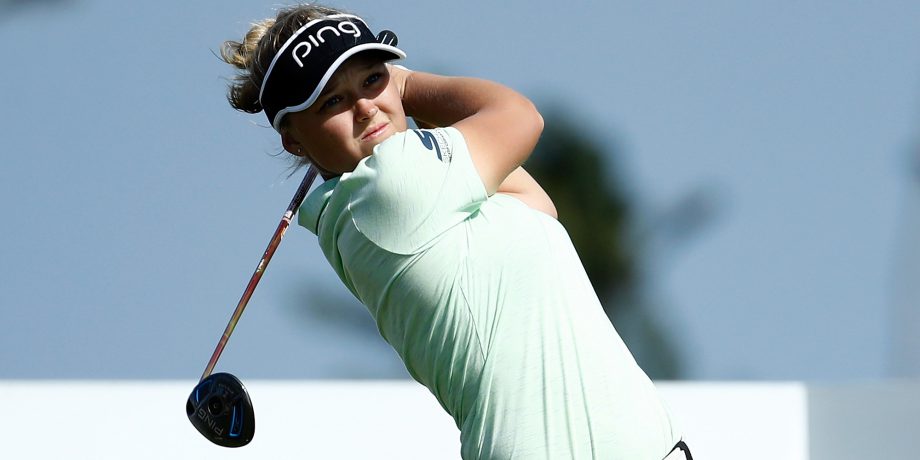 PARADISE ISLAND, Bahamas – Canada’s Brooke Henderson birdied the par-5 18th hole and had a one-stroke lead over top-ranked Shanshan Feng on Saturday in the suspended second round of the wind-swept Pure Silk-Bahamas LPGA Classic.

Henderson of Smiths Falls, Ont., shot an even-par 73 to get to 5 under overall after two rounds and three days at the Ocean Club Golf Course in the event cut to 54 holes after wind wiped out play most of Friday.

“It was windy today,” Henderson said. “I feel like overall Britt (caddie and sister) and I did a really good job again just calculating numbers and negotiating the wind as best we could. There was a couple of bogeys I would like to take back, but having four birdies is really good.”

Feng had nine holes left when play was suspended because of darkness. On her last hole, the Chinese star birdied the 18th.

“I know this is only the first tournament of the year, but normally I’m pretty good in the wind,” Feng said. “Actually, I get more excited in the wind. It’s not really bothering me.”

Henderson began the second round with a bogey Friday morning just before play was called for the day. The 20-year-old Canadian dropped another stroke on the par-3 third, birdied the par-4 sixth and played the back nine in 1 under with birdies on the three par 5s.

“I’m try to hit as many low shots as possible, not just into the wind, but also when it’s across and sometimes even down,” Henderson said. “And just play in the back of my stance, keep my hands low.”

Maude-Aimee Leblanc of Sherbrooke, Que., was even through 12 holes and Hamilton’s Alena Sharp was 4 over through nine holes. Quebec City’s Anne-Catherine Tanguay finished her second round and was projected to miss the cut at 12 over.

Lexi Thompson was 3 under along with Ryann O’Toole, Danielle Kang, Luna Sobron Galmes and Wei-Ling Hsu. Thompson and Sobron Galmes had 10 holes to play in the second round, and Hsu had nine left. O’Toole had a 69, and Kang shot 73.