Henderson second with one round to go at Reignwood LPGA Classic 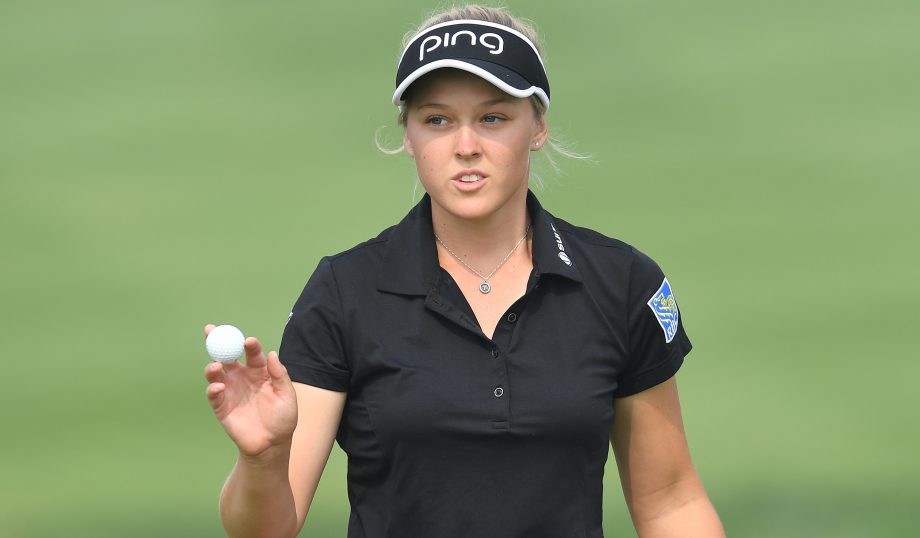 BEIJING – Mi Jung Hur birdied the par-5 18th hole for a 6-under 67 and a one-stroke lead over Canadian Brooke Henderson on Saturday in the Reignwood LPGA Classic.

Hur was 5 under on the back nine at Reignwood Pine Valley to take a 20-under 199 total into the final round of the Asian Swing opener. The 26-year-old South Korean player had a bogey-free round after shooting a tournament-record 63 on Friday for a share of the second-round lead with Henderson.

“On the back nine, just everything works really well,” said Hur, a two-time winner on the LPGA Tour. “Front nine, I think it’s all about the putter. Didn’t work on the front nine, but works on the back nine.”

The fourth-ranked Henderson shot a 68, saving par on 18 for a bogey-free day.

“I think the winner tomorrow is going to shoot a really low score,” the 19-year-old from Smith Falls, Ont., said. “I don’t think anybody is going to run away with it, necessarily. I think it’ll be really tight right down until the end. So making lots of birdies and playing smart all the way around.”

Planning to play all six weeks in Asia, she has two victories this year, winning the KPMG Women’s PGA Championship in June for her first major and successfully defending her Cambia Portland Classic title in July.

“Five under is a solid round for me and I’m happy with that,” Henderson said. “I would’ve liked to have finished with a few more birdies. Left one on 17 and kind of gave 18 away.”

“Definitely not the finish I was looking for,” Henderson said. “Kind of let them both slip away. I guess that’s what tomorrow is for. Hopefully, get a couple quick birdies and get back in.”

China’s Shanshan Feng, the bronze medallist in the Rio Olympics, had a 69 to drop three strokes back along with South Koreans Mirim Lee and In-Kyung Kim. Feng won the inaugural Reignwood LPGA in 2013 at 26 under for the second of her four tour titles. In 2012, she won the LPGA Championship to become China’s first major champion.

Lee got the spot with Hur and Henderson in the final group Sunday, shooting a 66 to match the best score of the day. Lee is the defending champion after winning the 2014 edition of the event that was not played last year.

Kim had a 68 with seven birdies and three bogeys.

“I think I manage the round pretty well,” Kim said. “It was a little bit troubling getting the target with the tee shot. Maybe they moved the tee box a little bit here and there.”

Second-ranked Ariya Jutanugarn was tied for ninth at 10 under after a 69. The 20-year-old Thai player has a tour-high five victories and would take the player of the year points lead from idle Lydia Ko with a ninth-place finish or better.

Older sister Moriya Jutanugarn, winless on the tour, also was 10 under after a 69.

Taiwan’s Yani Tseng had her best round of the year, birdieing the final three holes for a 66 to get to 9 under. She won the last of her 15 tour titles in 2012.

Hur won LPGA Tour events in 2009 in Oregon and 2014 in Alabama, finishing at a personal-best 21 under in the second victory.

“I just want to break that record,” Hur said. “If I set my goal and focus more about that it will help me to focus. … I just want to focus on my every shot. That’s the most important thing. Like crowd here is a little bit noisy, but they’re really fine.”