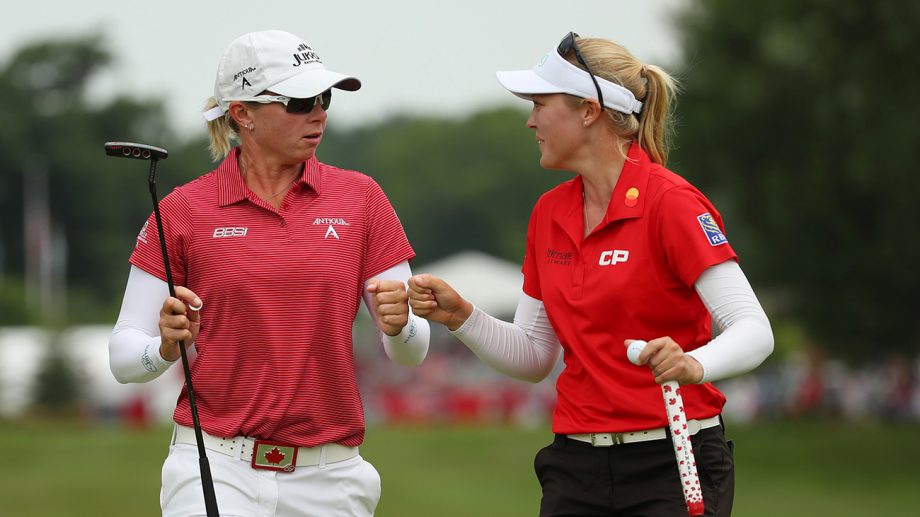 They were the Olympic rookies at the 2016 Rio Olympics.

The Tokyo Olympics this summer will be Henderson and Sharp’s second Games together representing the red and white. With success in the LPGA apparent for both golfers in the five years since Rio 2016, both Henderson and Sharp revel in the opportunity to medal in Tokyo.

“I am honoured and proud to be a part of Team Canada this summer,” Henderson said. “I love representing my country and feeling all of the support of family, friends, and Canadian golf fans back home.”

Sharp turned pro in 2003 and is still going strong at age 40. With nine professional wins, Sharp continues to be a model of consistency for Canadian women’s golf on the LPGA Tour. Look no further than the 2021 KPMG Women’s PGA Championship, where she started with two sub-70 rounds, before finishing a T-25.

As Sharp is on the backend of her career, Henderson is just beginning. She meteorically rose in the women’s game, winning the KPMG Women’s PGA Championship in 2016. Since then, Henderson has 10 LPGA Tour victories, making her the winningest Canadian golfer in the sport’s history (male or female).

As Henderson experienced a soar in popularity and success, she had her Canadian compatriot Sharp to lean on for advice and mentorship.

“It means a lot to share this journey with Alena again,” Henderson said. “She’s been a huge mentor and a great friend to me.”

Since competing in the Rio Olympics, Henderson and Sharp continue to elevate Canadian women’s golf with class and excellence. At the 2018 CP Women’s Open in Saskatchewan, Sharp brought awareness and respect to the Humboldt Broncos junior hockey team, evidenced by her green and yellow golf bag. Henderson went on to cement her legacy at Wascana Country Club with a CP Women’s Open title, becoming the first Canadian woman to win the national golf championship since Jocelyne Bourassa in 1973.

Henderson’s first embraces were with her sister/caddie, Brittany, and her Dad, Dave. Sharp was the first to congratulate Henderson, spraying the champagne in celebration on the 18th green.

Whenever Henderson wins, it’s not long after she receives a congratulatory message from Sharp. Henderson also returns the favour, being there for her teammate during important moments of her life. For example, when Sharp got married last November to her caddie and partner, Sarah Bowman, Henderson included herself in the festivities.

It’s evident that the bond between Henderson and Sharp runs deep beyond the tee box, fairway, and putting green.

“We’re there to cheer each other on in the golf competition, but when you go to an Olympic Games, you become part of a bigger team,” Sharp said.

Competing in the Olympics will look different in 2021 than in 2016. For Henderson and Sharp, they will practice together at Kasumigaseki Country Club, scouting the course before the women’s golf competition commencing. Both Canadians will lean on their male counterparts, Corey Conners and Mackenzie Hughes, for advice, as the men’s tournament occurs a week before. The women’s competition takes place from August 4-7, 2021.

“Anything can happen over four days,” Henderson said. “You have to work hard, focus, get a good plan together and I’m just excited to have the opportunity to go and compete.”

Life beyond the course won’t possess the jubilation that exists in the Olympic Village. Due to the COVID-19 pandemic, no fans will be permitted on the course, as well as no friends and family. Instead, golfers must rely on their own energy to get motivated.

Henderson and Sharp are used to playing tournaments without spectators over the past year. Away from the course, they will keep themselves busy, whether that’s playing cards or watching Netflix.

Most of all, in an Olympics unlike any other, Henderson and Sharp will have their partnership and friendship, that will extend far beyond the outcome at the Games.