Henderson star of Manulife Classic despite struggles on the course 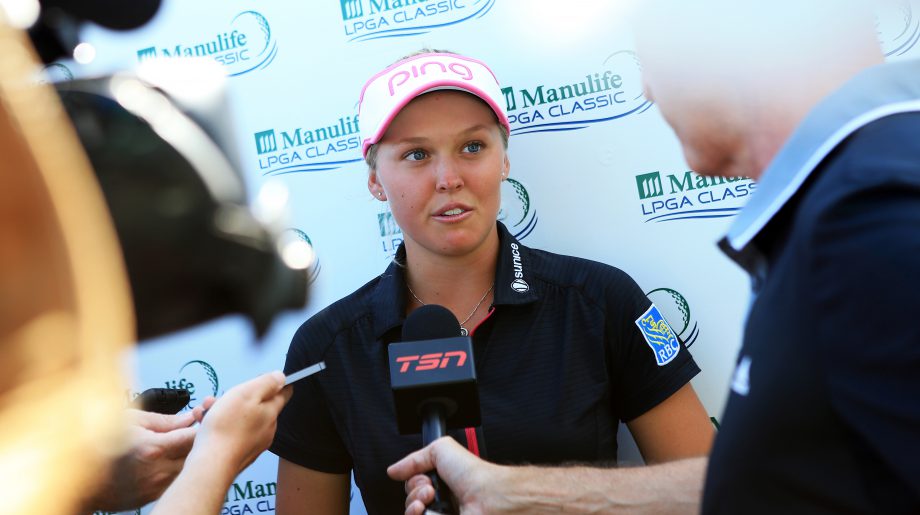 You don’t need a map of Whistle Bear Golf Club or an app on your phone and you don’t even have to ask a course official for help.

All you have to do to follow the crowds that trail the 18-year-old phenom from hole to hole. Even though Henderson’s not the top player at the tournament, not even the low Canadian, the world No. 3 is by far the most popular, with hundreds of fans following her.

“I turned to (sister and caddy) Britt at one point, I was like, ‘it’s going to be boring when we go back to not having this kind of crowd,”’ said Henderson after stepping off the 18th green. “It’s really been so much fun to play in front of, and I just thank everybody for coming out.”

After speaking with reporters, Henderson waded into an area roped off by police and security so she could pose for pictures and sign memorabilia, with one fan even coming away with an autograph on her face.

Even when she struggled on the 18th hole – her tee shot got lost in the woods and she had to settle for a bogey – the fans cheered the native of Smiths Falls, Ont., on. That bogey and another on 17 sank her to 3-under 69 on the day and into a tie for 29th at 6 under.

“I was 5-under through 16 holes and had the whole crowd behind me, and the crowds were amazing today,” said Henderson. “Unbelievable really, and I just love playing in front of them, and I had a lot of fun today, which again, is kind of newer. I haven’t been enjoying it as much, but today I really enjoyed myself.”

Hamilton’s Alena Sharp (70) and Quebec City’s Anne Catherine Tanguay (68) were the low Canadians, tying for 23rd at 7 under. Maude-Aimee Leblanc (72) of Sherbrooke, Que., was tied for 46th.

“I’m just really thrilled,” said Tanguay, who splits her time between the LPGA and Symetra Tours. “I don’t think I made any mistakes today and that was the goal for me this week.”

The crowds may have been focused on Henderson, but all four Canadians have enjoyed the support of the home-town fans. Henderson had the earliest tee time of the four and after she had completed her autograph duties the fans stayed at the 18th green to give a rousing ovation to each Canadian player as they sank their final putts of the round.

“The fans are amazing,” said Sharp. “There are so many people out here watching and it’s great to see for women’s golf. We don’t get a lot of tournaments where we get huge crowds like this so you’ve got to soak it up.”

Sharp, who placed a career-best fourth at last week’s Canadian Women’s Open, hopes to finish the Manulife Classic with a strong performance and contend for her first ever LPGA title.

“Tomorrow that’s my goal, to start from tee No. 1 no matter who’s done what before I tee off and just play one shot at a time and see how it goes,” said Sharp.

South Korea’s Mi Hyang Lee shot a 6-under 66 to take the top spot on the leaderboard at -14. Fellow Korean Hyo Joo Kim, who shot a 68 to sit in second and a shot behind the lead, Lee will be in the same pairing for the fourth and final round.

Lee will have a lot of competition in a very close field, with eight other players within four shots of her, including world No. 1 Lydia Ko.