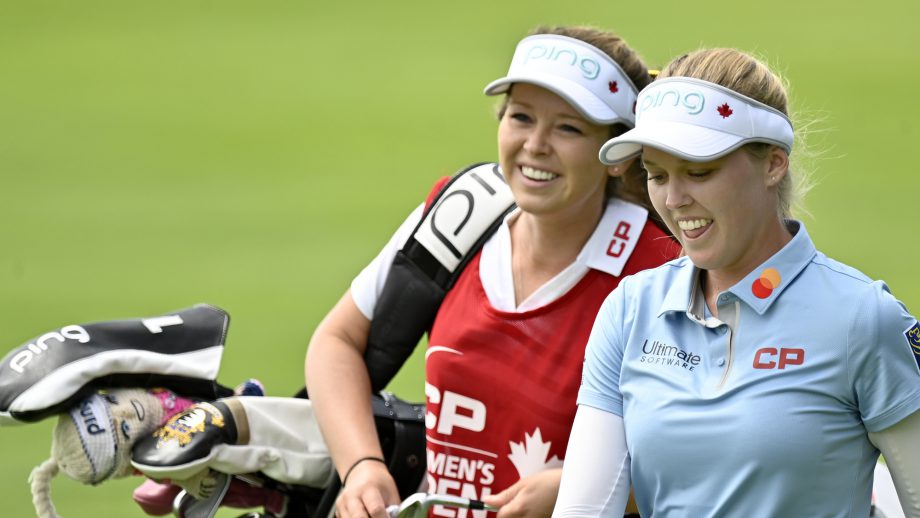 AURORA, Ont. – Brooke Henderson was off to a rough start at the CP Women’s Open, struggling to read the swirling winds at Magna Golf Club.

She had started the day in a three-way tie for third, just three shots back of second-round leader Nicole Broch Larsen. But after bogeys on Nos. 4 and 6, it seemed like Henderson had played herself out of Canada’s national championship on Saturday and would not be able to defend her crown.

But that all changed with the eighth hole.

“I felt like I was playing decent golf, but it just wasn’t really going my way,” said the 21-year-old Henderson. “Then on the seventh green a little boy gave me a high five and then he continued that the rest of the round.

“He kind of cheered me up a little bit. I think I tried to get back to even on the front nine. Going to the eighth tee I was trying to just make two birdies, get it back to even, and then see if I could go really low on the back.”

Henderson fired three-straight birdies after that high five, shooting 9-under par on her last 10 holes. Her 7-under 65 round closed the gap to finish the day just two shots back of co-leaders Broch Larsen and world No. 1 Jin Young Ko.

It was a miraculous comeback after Henderson trailed Broch Larsen by as many as eight shots and had slid back into 20th on the leaderboard.

“I can’t really remember the last time I was in the 20s through nine holes,” said the native of Smiths Falls, Ont. “I think just taking into tomorrow, if I can try to keep this momentum and energy that I had on the last few holes, hopefully maybe hit it a little bit better off the tee, hit it a little closer, and hopefully my putter can bail me out.”

No. 12 was also a key hole for Henderson. After a precise layup got her near the pin she drained a 10-foot putt for an eagle on the 513-yard par 5.

“I was 1 under on the day at that point and I was feeling a lot better about myself than 2 over,” said Henderson. “Once I made that eagle it just gave me a lot of energy and birdied the next two holes, and then just kind of periodically coming in.”

Broch Larsen and Ko were in the final pairing for the day and were focused on their own duel, essentially playing a one-on-one match. Broch Larsen had her third straight 6-under 66 at the tournament and Ko has a 7-under 65 to put them both at 18 under overall, two shots ahead of Henderson.

Although both of them were zeroed in on their own performances, Broch Larsen said they both knew something was up in the group ahead of them, judging purely from crowd reactions.

“We could definitely hear those roars coming in on the back nine,” said Broch Larsen after handing in her scorecard. “Every time they went a little bit louder than normal I knew Brooke made a birdie.

“I don’t know what she’s at but I knew she had a rough start and she had a good back nine, I guess.”

Henderson was the first Canadian to win the CP Women’s Open in 45 years when she triumphed at Wascana Country Club in Regina last year. If Henderson’s victorious on Sunday, she’ll become only the third player in the tournament’s history to win back-to-back titles, joining Lydia Ko (2012, 2013) and Pat Bradley (1985, 1986).

She’s not going to get ahead of herself, though.

“I’m really far from that. It’s going to a long 18 holes,” said Henderson, who will be in the final group with Ko and Broch Larsen on Sunday. “I’m not even in the lead, so it doesn’t really look likely. At the same time, I feel like if I can make a lot birdies and kind of get the momentum my way, you never know what can happen.”

Quebec City’s Anne-Catherine Tanguay, the other Canadian left in the field, shot a 1-under 71 to improve to 5-under overall.

Tanguay bogeyed the par-4 third hole before picking up birdies on two of her next three holes. She bogeyed the 10th but got the stroke back with a birdie on the 12th hole.