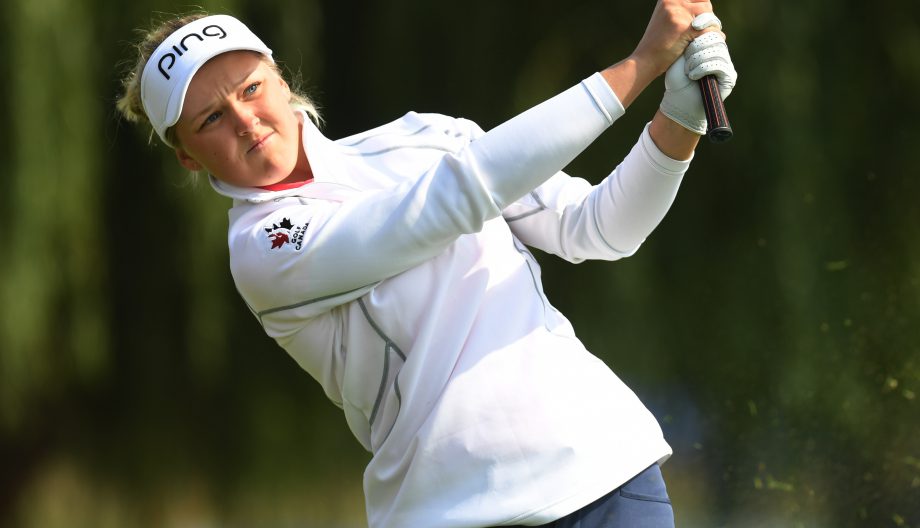 TAIPEI, Taiwan – Hee Young Park and Ha Na Jang fought through gusty wind and early rain Friday to share the second-round lead in the LPGA Taiwan Championship, while Canada’s Brooke Henderson was a stroke back.

The South Korean players each shot their second straight 3-under 69 at Miramar.

They also each had only one bogey, Jang on the par-4 15th when she got a chip only halfway to the hole and missed a 20-footer, and Park on the par-4 16th when she drove into a bunker and came up well short of the green in two.

“This week is more like just be patient is very important, because weather is so bad and the golf condition so bad, too,” the 24-year-old Jang said. “That’s why I’m just hitting fairway, the green. Very important this week. Yep, this weather, this score.”

Smiths Falls, Ont., native Henderson (71) was a stroke back along with China’s Shanshan Feng (69), South Korea’s So Yeon Ryu (68) and South Africa’s Lee-Anne Pace (70). Defending champion Lydia Ko was tied for 18th at 1 under after a 73. The top-ranked New Zealander won by nine strokes last year, and has four LPGA Tour victories this year.

Park prepared for the conditions heading into the Asian Swing.

“I expect a lot of rain, so I had practice,” the 29-year-old Park said, “It’s about just one week, but I had a lot of practice with the trajectory. Different kind of shot from the range, which is a lot of help this week also. So, that’s why I hit it a lot close today even with the wind and the rain.”

“I’ve been working on having a low ball shape” Ryu said. “I’ve been practicing like low ball and high ball, so I had no problem to control the low one. Luckily, all shots worked pretty well, so I didn’t have any like major miss shots. … Only one bogey with this weather is pretty positive.”

Park and Jang each have two LPGA Tour victories. Jang won early this season Florida and Singapore, and Park won events in 2011 and 2013.

“Always difficult with wind,” Park said. “I have to play every single shot really careful and more think about. Makes more tired. So hard to focusing end of the hole. That’s why I tried to.”

Jang also played well in the bad early conditions, hitting to 3 feet on the par-3 third and making another birdie on the par-5 sixth. She made an 18-footer on 10, and chipped to a foot on the par-5 12th.

The 19-year-old Henderson has two victories this year, winning the major KPMG Women’s PGA in June. She plans to play all six week on the Asian Swing, a journey that started in China with a fourth-place tie, and will take her to South Korea, back to China, and then to Malaysia and Japan.

Japan’s Sakura Yokomine , the first-round leader after a 67, had a 75 to drop into a tie for 10th at 2 under. American Paula Creamer, a stroke back entering the day, also was 2 under after a 75.