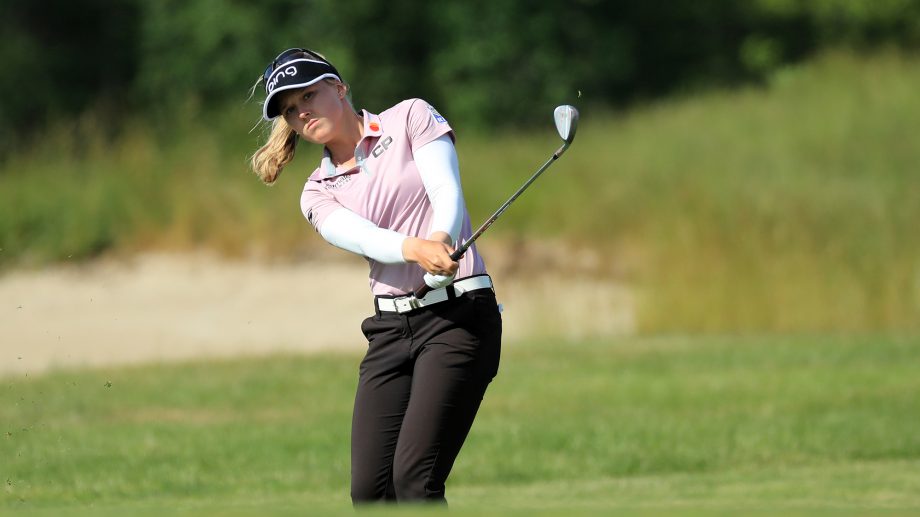 GALLOWAY, N.J. – After 3-putting from off the green on the 15th hole to fall two shots off the lead in the final round of the ShopRite LPGA Classic, Lexi Thompson made it a point not to stress out over it.

The calm demeanour paid off as Thompson finished birdie-par-eagle on her last three holes Sunday, and made a 20-foot putt for the eagle at the 18th to win the $1.75 million event on the Bay Course at Seaview by one stroke over Jeongeun Lee6.

“I just really tried to find the positives in it because I knew coming in there were birdie holes,” Thompson said. “If I let it affect me, I wouldn’t have finished the way I did. At that point I didn’t know where I was, position-wise. I kind of thought I was behind for sure . a few back.”

Playing in winds that blew steadily from 20 to 30 miles per hour, Thompson had a 4-under-par 67 for a 54-hole score of 12-under 201. She posted her 11th career LPGA Tour victory – first since last year’s season-ending CME Group Tour Championship. It extended her streak to seven straight years with at least one win on the tour.

Thompson, who made her professional debut in this event in 2010 at the age of 15, set up her eagle at the 18th by needing to hit a 190-yard second shot with the wind at her back, to get it to the front of the green.

“With a jumper lie and the wind, I ended up hitting a pitching wedge, which is my 135 club,” she said. “It ended up landing 50 yards short and rolling up there.”

On the putt, she said, “I got chills, like my hair on my arms was sticking up once I made it.”

Lee6, the champion of last week’s U.S. Women’s Open who was playing two groups behind Thompson, lost her lead with three consecutive bogeys from holes 13 through 15 before bouncing back with a birdie at No. 16 to tie Thompson.

However, needing an eagle to force a playoff after reaching the green in two, she just missed a 45-foot putt to tie and had to settle for a birdie, giving her a 70 and second place at 202.

“The way I’m playing the ShopRite tournament, it’s amazing, and I’m pretty satisfied with finishing in second place,” Lee6 said through an interpreter.

Ally McDonald, seeking her first career LPGA Tour victory, challenged on the back nine and took third place at 204 following a 70. Two-time ShopRite LPGA champion Anna Nordqvist had a 69 for fourth place at 206.

Mariah Stackhouse, who began the day one stroke off the lead, fell back with a double bogey at the fifth hole and couldn’t come back. Her round of 74 left her in a three-way tie for fifth at 207 with Ariya Jutanugarn (68) and Yu Liu (72).