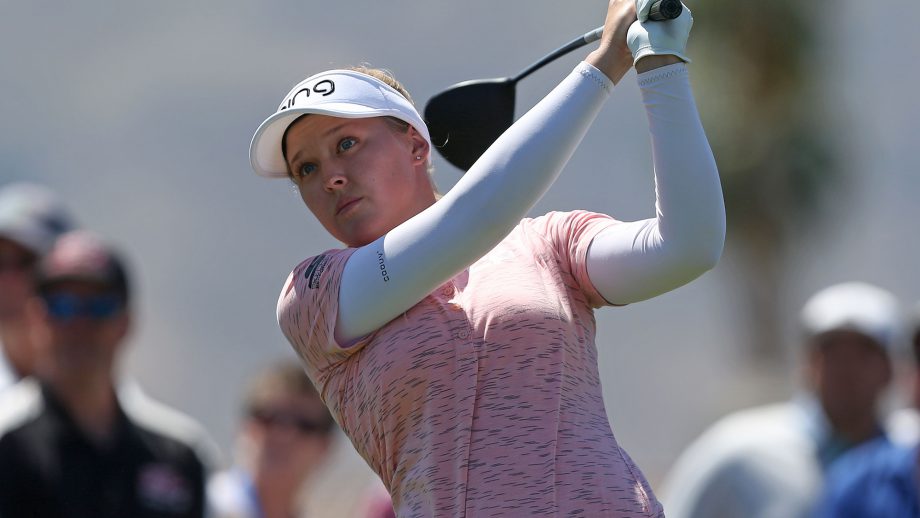 RANCHO MIRAGE, Calif. – Ally McDonald was the last player to finish the first round of the ANA Inspiration.

It was worth the wait.

The 26-year-old from Mississippi closed with a 5-foot birdie putt on the par-5 18th in fading light Thursday to take the lead at 4-under 68 in the first major championship of the year.

Playing in the last group of the day off the first tee, she birdied all four par-5 holes on the tree-lined Mission Hills course toughened this year by thicker rough, tighter fairways and some longer holes.

Only 28 of the 112 players broke par, with McDonald and the other afternoon starters facing gusting wind. She had a one-stroke lead over 2014 champion Lexi Thompson, Jin Young Ko, Hyo Joo Kim and Linnea Strom. Thompson, Ko and Kim played in calmer morning conditions, but with the thick rough wet from dew.

“I just drove the ball really well,” McDonald said. “Gave myself a lot of opportunities to make good approach shots into the green. … Sometimes you hit the ball above the hole and you have to take a two-putt.”

McDonald played at Mississippi State after becoming the only female player to win the state boys’ high school championship. She has made only two previous starts in her third season on the tour, tying for 58th two weeks ago in Phoenix in the Founders Cup and missing the cut last week in Carlsbad.

“I think in this position that I’ve never been in it’s so easy to get ahead of yourself,” McDonald said. “For me, I’m just going to take it easy. I know that on the very first day a great round is awesome, but there is so much more golf left to play.”

McDonald birdied the last three holes on the front nine and added on another on the par-5 11th. She gave back a stroke on the par-3 14th before pulling ahead on the water-guarded 18th.

Also playing in the afternoon, Strom made a 25-foot birdie putt on the par-3 17th, with the pin on the far right side, to reach 4 under, then bogeyed the 18th after hitting her drive over the right-side cart path and under a tree. The former Arizona State player from Sweden is making her fifth start in her first season on the LPGA Tour.

“I know it’s a tough course, but there are some birdies out there,” Strom said.

Thompson birdied the final two holes, hitting to a foot on 18 after caddie Benji Thompson talked her into a lower-lofted wedge.

“I don’t have greed on the course,” Ko said. “Course is hard, so I’m thinking always, ‘Hit the fairway, also green, middle of the green. Like two-putt is fine. I’m good.”’

Playing partner Jessica Korda had seven birdies in an adventurous 70. Coming off a second-place tie in Phoenix in her return from a left forearm injury, she also had a double bogey after driving out-of-bounds on the par-4 third and three bogeys.

Lydia Ko, the 2016 winner, matched playing partner Thompson with a birdie on 18.

“You just have to play smart,” Lydia Ko said. “If you are in not so good position, try and not get yourself out of it.”

Hamilton’s Alena Sharp shot a 4-over 76 to finish the day tied for 80th.

Defending champion Pernilla Lindberg shot 73. She beat Inbee Park last year on the eighth hole of a sudden-death playoff that ended on a Monday. Park, the 2013 winner, also shot 73, playing in the afternoon.

Michelle Wie and Nelly Korda shot 74 in the afternoon.

Wie hadn’t played on tour since withdrawing during the first round of her Singapore title defence in late February because of pain in her right hand. She played a four-hole stretch in 5 over, then birdied the next four holes.

“It was definitely a battle,” Wie said. “Definitely proud of myself for coming back. Front nine felt just really rusty.”

Sei Young Kim made a 10 on No. 18 in a 78. After laying up on the par 5, she twice hit into the water and was penalized a stroke for dropping from the wrong height. Kim instinctively held out her arm and dropped at shoulder-height, but the modernized Rules of Golf that began this year require drops to be knee-height.