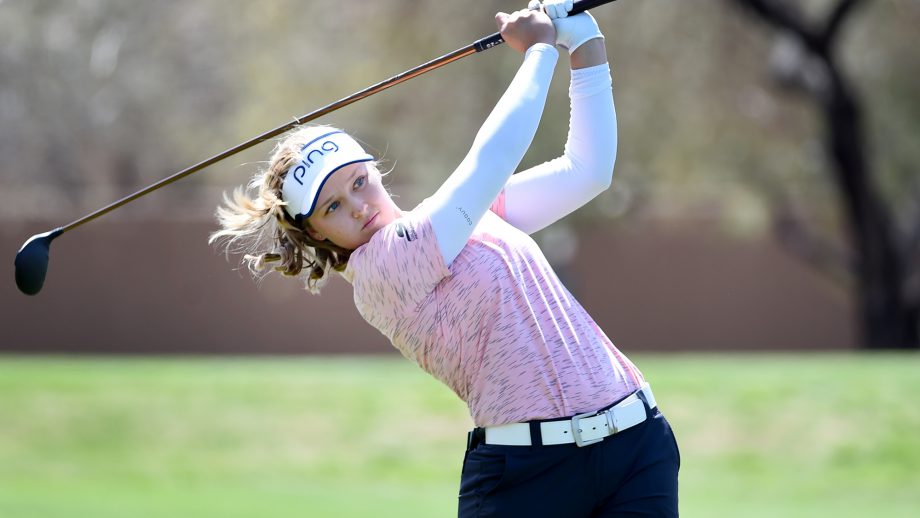 PHOENIX – Jin Young Ko channeled her inner Dustin Johnson to win for the first time in the United States.

After an even-par 72 left her five strokes back heading into the weekend at the Founders Cup, Ko talked to fellow South Korean player Jennifer Song about the top-ranked PGA Tour star.

“She told me Dustin hit so bad and he didn’t get angry – put clubs in the bag and just walk,” Ko said. “So, I tried like Dustin yesterday and today. I just tried no angry, no happy, just focus. ”

The 23-year-old Ko closed with bogey-free rounds of 64 and 65 at Desert Ridge to rally for a one-stroke victory Sunday. She birdied Nos. 14-16 and parred the final two to finish at 22-under 266, then won when third-round leader Yu Liu missed a 15-foot par putt on the par-4 18th.

Liu shot a 70 to tie for second with playing partner Carlota Ciganda and sisters Jessica and Nelly Korda. Ciganda closed with a 69, Jessica Korda eagled the two back-nine par 5s in a 64, and Nelly Korda shot 66.

“Lots of players thinks if there is a pin in the ball might hit the pin and come out,” Ko said. “I think it’s great to put the pin in because of it makes it easier for me to putt because it is a small target.”

She broke through in the U.S. on Sunday in the event that honours the 13 women who founded the LPGA Tour, a goal she said she thought about too much last year.

“But my friends told me, ‘You can do it.’ Also my manager and my parents, my caddie, all people say you can,” Ko said. “I got lots of confidence for this year. Really good for third win in the States.”

Ko has three top-three finishes in four events this year. She was second behind Nelly Korda last month in her Australian title defence and was coming off a third-place tie three weeks ago in Singapore.

The 23-year-old Liu missed a chance to follow Shanshan Feng as the second Chinese winner in tour history.

“It was amazing week for me,” Liu said. “First time being able to play in the final round, first time being in contention. Didn’t handle the way I wanted to, but feel like there is always room for improvements.”

The former Duke player wasn’t sure where she was on the leaderboard playing the 18th.

“I don’t know exactly where I stand, if I needed to make birdie or just save par and get to playoff,” Liu said. “So I wasn’t as focused as I would’ve liked. I think that’s why I made bogey.”

“I would’ve loved to win,” the Spaniard said. “Always special here in Phoenix, but I couldn’t today.”

Jessica Korda returned from a left forearm injury to make her first start of the season.

She parred the last two holes, leaving a 20-footer an inch short on 17 and coming up well short on 18.

“I knew I had to post a low one just to kind of make the girls a little nervous,” she said. “A little disappointed with leaving that last putt short because I knew I needed to make it. I thought it was going to be downhill. Just the difference in the shade with the light I guess just confused me a little bit.”

Nelly Korda had her fifth straight top-10 finish to open the season. She also parred the final two holes.

“I’m bummed, but I’m not too bummed because I played well this week and I’m happy with the way my game is trending,” she said. “I gave myself an opportunity on the last couple holes. Seventeen just burned the edge and then I lipped out pretty hard on 18, unfortunately.”

Top-ranked Sung Hyun Park faded after sharing the second-round lead with Liu. The Singapore winner had weekend rounds of 69 and 72 to tie for 14th at 15 under.