Holmes gets an ace, 4 straight birdies to expand Doral lead 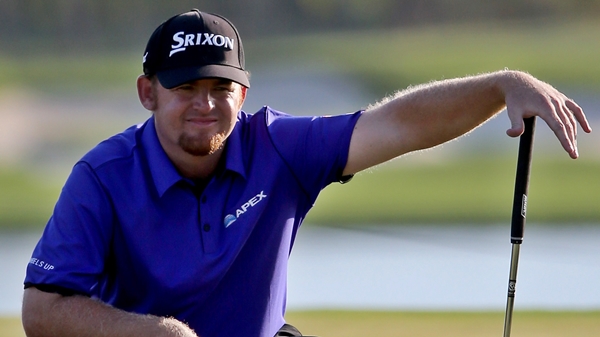 DORAL, Fla. – J.B. Holmes and Dustin Johnson each made a hole-in-one on the par-3 fourth hole in a span of 20 minutes. Holmes was in a league of his own in the final hour Saturday at the Cadillac Championship.

His advantage down to one shot, Holmes answered by running off four straight birdies in the rain to expand his lead to the largest it has been all week. He closed with a bogey for a 2-under 70, leaving him five shots ahead of Johnson and Masters champion Bubba Watson.

On a day of two aces, five other eagles on par 4s and even a scuba driver retrieving the 3-iron that Rory McIlroy heaved into the lake the day before, Holmes took some of the drama out of Doral with his late surge.

Johnson, who made his ace with a 7-iron from 207 yards, converted a birdie on the par-4 16th to get within one shot. Holmes appeared to be struggling, with two bogeys on par 5s and only the hole-in-one keeping him in front. But the big hitter from Kentucky poured in a 12-foot birdie putt at No. 14, and he was on his way.

Holmes went at the flag on the par-3 15th and made a 12-foot birdie putt. From the back bunker on the reachable 16th, he blasted out to tap-in range for another birdie. And as the rain came down harder, he got even better. He drilled a 333-yard drive down the middle of the 17th fairway and holed another 12-foot birdie putt.

He ended with a bogey from the palm trees and fell back to 11-under 205.

“I can’t worry about what J.B. is doing,” said Watson, who holed a bunker shot from behind the 18th green for birdie. “This golf course is hard enough as it is. If I start worrying about other people, I’m going to lose it.”

Ryan Moore, tied for the lead after a birdie on the opening hole, fell back with a triple bogey on the third hole and was on the verge of falling too far behind until he hit his tee shot on the 301-yard 16th hole to 15 feet for an eagle. He salvaged a 74 and was six shots behind.

Bill Haas had the low score of the third round, making eight birdies for a 65. He was tied for fifth with Louis Oosthuizen (67) and Henrik Stenson (72), though they were seven shots behind.

McIlroy provided the highlight of this tournament by slinging his 3-iron into the water left of the par-5 eighth hole Friday after a shot into the lake. He opted to play with only 13 clubs in the third round, but back-to-back bogeys on the front nine and back nine kept him from making a move. He had a 72 and was 10 shots behind.

“No way,” McIlroy said. “That’s why I’m not leading the tournament.”

He was on the third green when he heard the roar and saw Johnson raise both arms after his 7-iron went in. Then, Watson was heading down the fifth fairway when he heard another road and saw Holmes doing a jig on the tee box.

“Maybe one of us should have made a hole-in-one instead of skip a group,” he said.

Amazingly, both shots looked identical. They landed in the middle of the green, rolled up the slope and were in the center cut of the hole. Johnson’s shot drop on the final few turns, while Holmes’ shot gently struck the pin before it disappeared.

“When you’re on top of the leaderboard and you can get a hole-in-one, that’s awesome,” he said.

There were a lot of awesome shots at Trump National Doral.

Watson holed out from a bunker for the second straight day. Luke Donald and Oosthuizen holed bunker shots for eagle on the 16th. Rickie Fowler dunked one from the 11th fairway for eagle. There were 10 eagles in the third round, only three of them on a par 5.

And then he took off, and gave the rest of this World Golf Championship field one last day to try to catch him.