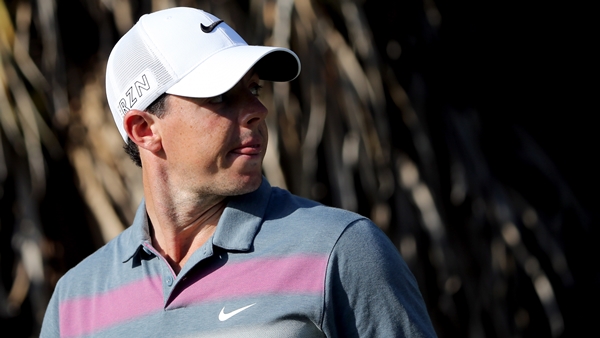 Holmes was 11 shots worse than his tournament record-tying 62, finishing with a tee shot in the water and a double bogey on the 18th hole Friday for a 1-over 73. That still was enough to take a two-shot lead over Ryan Moore (71) into the weekend at the Cadillac Championship.

McIlroy made the wrong kind of splash at Trump National Doral – first with a shot, then with his club.

On a wild afternoon of eagles, birdies and big numbers at every turn, McIlroy produced the biggest highlight when he pulled his 3-iron into the water on the par-5 eighth, and then heaved the club some 50 yards into the middle of the lake.

“Felt good at the time,” McIlroy said. “Look, I just let frustration get the better of me.”

McIlroy managed to salvage a bogey, made three birdies on the back nine and shot a 2-under 70 to stay in the hunt at this World Golf Championship. He was still eight shots behind Holmes, though the Blue Monster is a tough course for anyone to protect a lead.

And it didn’t take much to get into trouble.

Holmes began the second round with a 360-yard drive and a 6-iron onto the green at the par 5. It rolled into the water, and he made his first bogey of the tournament. His approach on the third hole came up just enough short to go into the water for another bogey. And his tee shot on the 18th was pulled just enough for another splash. He at least countered with five birdies to stay in the lead.

He was more irritated by the bogey on No. 1 than the double bogey at the end of his round, and what set him off was a reminder than he thought the old Blue Monster was too easy for a World Golf Championship.

“There’s a difference between easy and hitting two perfect shots and the ball going in the water,” Holmes said. “That’s a joke. I hit a 6-iron straight up in the air, it landed 3 feet off the left of the green and 5 feet on it and it goes in the water on the right side of the green. That’s not hard. That’s stupid. That’s unfair.”

Still, he was in a good mood heading into the weekend.

Adam Scott made six birdies in his round of 68 and was three shots behind at 6-under 138. Masters champion Bubba Watson made a pair of eagles, including a bunker shot he holed at the 10th, for a 69. Henrik Stenson bounced back from a double bogey in the water at the par-3 fourth hole with three straight birdies in his round of 71. They were at 4-under 140, five shots behind.

Moore managed to avoid trouble for most of the day, dropping his lone shot at the 14th from a bunker. He has made par or better on 34 of the 36 holes he has played. He used the word “fluke” to describe his 66 (with a double bogey on the last hole) and the 62 by Holmes.

“I don’t know if it would have real really mattered what golf course either of us were on,” he said. “I was hitting good shots and hitting them next to the hole and making every putt I looked at. So I think that was more the players than golf course. Today, I think this was how this golf course plays. It’s just a really difficult golf course.”

Scott’s 68 was the low round of the day, while the average score again was about 73.4 For the second straight day, only seven players shot in the 60s. Scott thought his first-round 70 was good, too, except that he was eight shots behind.

Like everyone else, he couldn’t figure out how Holmes shot 62, and there was some relief to see Holmes play a more ordinary round.

“He might have had the round of his life – and certainly round of the year already – yesterday,” Scott said. “I don’t know if there’s going to be better than that anyway. … And for me, sitting eight shots back after a pretty good round myself yesterday, I just have to hope he’s not going to do it again, and I can slowly pick away at those eight shots.”

Holmes didn’t feel as though he played much worse than his 62 in the opening round, except for not making as many putts.

Ultimately, he was pleased with his position because he still had a better score than anyone else. The Blue Monster has a mean streak, though, and now it’s a matter of Holmes and those chasing him to hang on.

“If you had told me at the beginning of the week I would have a two-shot lead after two rounds, I would have said, `All right, sounds good.’ Like I said, I’ve been playing great,” Holmes said. “Played great today.”