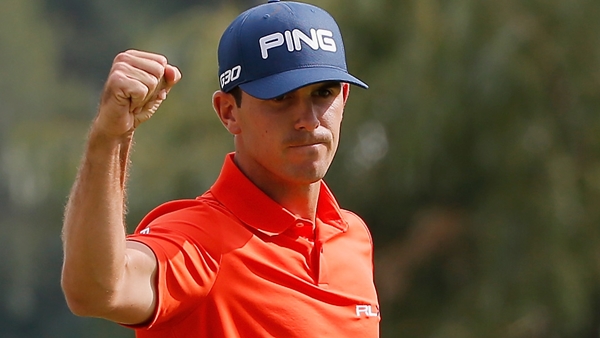 CHERRY HILLS VILLAGE, Colo. – Billy Horschel needed less than a week to give himself a second chance. If he keeps playing this well, his next shot at closing out a tournament won’t be nearly as stressful as the last one.

Horschel made a 32-foot birdie putt Saturday to wrap up his bogey-free third round at 7-under 63 and take a three-shot lead over Ryan Palmer heading into the final 18 holes of the BMW Championship.

On Monday at the Deutsche Bank Championship, Horschel had a 6-iron in hand on the 18th fairway and a chance to win or force a playoff, but he chunked the shot, made bogey and settled for a disappointing second-place tie.

Five days later, he gave himself a cushion at the third of the four FedEx Cup playoff events, rolling in a 22 footer for birdie on 14, then an 8-foot birdie on 15 to vault into the lead. He closed it out with the long one on 18 – the uphill, par-4 477-yard closing hole that is the third toughest on the course and has surrendered only 18 birdies all week.

Horschel had one of 14 rounds of 67 or better at mile-high Cherry Hills, where soaking rains and cool weather over the last two days have softened the course and chipped away at some of its defences. There were 15 67s or better through the first two days. The course played 1.7 shots easier Saturday than it did Thursday.

“The greens are so much more soft than the first day,” said Morgan Hoffman, who briefly flirted with 59 but had to settle for an 8-under 62. “You can really throw it at the flags and keep it there.”

Masters champion Bubba Watson shot 66 to draw into a third-place tie at 8 under with U.S. Open champion Martin Kaymer, who made seven birdies over the last 12 holes to shoot 64.

“Should have been eight,” said Kaymer, who three-putted from inside 20 feet on the par-5 17th and settled for par.

Wasn’t the worst display on the greens, though.

Rory McIlroy made a 60-footer on the fourth to get into a brief tie for the lead but gave all that back and more with a four-putt from inside of 5 feet on No. 12 – bringing gasps from the crowd. It was McIlory’s first triple-bogey or worse since the first hole of last year’s BMW Championship.

“I completely misread the first one,” he said. “Then, just hit a bad put the second, and then the third one, I was just going for a tap-in and just lost concentration.”

The world’s top-ranked player shot 2-over 72 and goes into Sunday nine shots off the lead.

Second-round leader Sergio Garcia also struggled. He lipped out a 4-foot par putt on No. 7 – the hole he eagled on Friday – and closed out his round with an approach shot that struck a fan in the grandstand. His 2-over 72 left him seven off the lead.

Playing in the same group with those two stars was Palmer, who shrugged it off and shot 3 under, closing with a 30-foot birdie on 18 to pull within three of Horschel.

“Rory, he’s No. 1 in the world, and Sergio has been up there for years,” Palmer said. “So, for me to come out and hang in there and play well, I’m taking the next step in my career, I think.”

Palmer came into the week at 37th in the FedEx Cup standings and a good finish will put him in the 30-man field for next week’s Tour Championship, where a $10 million bonus is at stake.

He had a share of the lead most of the day, until Horschel started going off during the last 90 minutes.

“I was watching (the scoreboard) and yelling at him from the fairway to stop, but it didn’t work,” Palmer said.

They’ll play together Sunday, in the final group along with Kaymer.

On the sideline Sunday will be Phil Mickelson, who withdrew after finishing the second round 14 shots off the lead, and Keegan Bradley, who made the difficult decision to withdraw because he didn’t feel right about a drop he made near the 18th green on Thursday.

The decision could be costly. Bradley came into the week ranked 28th, and depending on how Sunday goes, he could lose his spot in the top 30 and a chance at the $10 million.

Right now, Horschel looks like as good a bet as any to win it. He came into the week ranked 20th.

“There were a lot more positives from last week to take than just one bad swing on the last hole,” Horschel said. “So, I knew coming in that I was going to play well.”

Canada’s Graham DeLaet is tied for seventh at 5-under 205. The Weyburn, Sask. native carded a 69 Saturday and will need to climb a few spots Sunday in order to qualify for the TOUR Championship. He’s currently projected to finish the week 32nd on the FedEx Cup standings.