Horschel holds on for title at BMW Championship 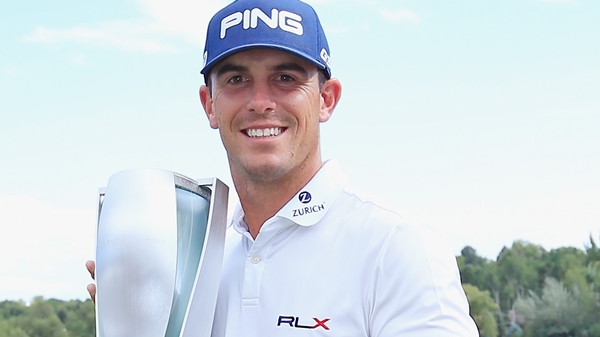 Horschel let a three-shot lead drop to nothing early in the final round of the BMW Championship before rebounding for a two-stroke victory over Bubba Watson. Horschel shot a 1-under 69 and finished at 14-under 266 to put himself in prime position for the FedEx Cup title and its $10 million bonus at the Tour Championship next week.

Horschel heads into the final week of the playoff chase in second place in the points standings thanks to the victory and his tie for second a week ago – when he chunked a 6-iron well short on the final hole, squandering a chance to beat or force a playoff with playoff leader Chris Kirk.

This time, the 27-year-old from Grant, Florida, smoothed his approach into the middle of the 18th green and the only drama was whether he’d have time for a quick pit stop before he had to putt. He sprinted up the fairway, ducked under the ropes and was back in plenty of time to two-putt and close out the victory.

“Obviously, after last week, a lot of people on Twitter were calling me a choker,” Horschel said. “I didn’t choke. I made one bad swing at a bad time. To start with a three-shot lead today and hold on means a lot.”

About an hour earlier, it was another chunked shot that drastically altered the course of the tournament.

Ryan Palmer erased his three-shot deficit to Horschel and was tied after six holes, then again after 11.

That left Sergio Garcia, who cut a seven-shot deficit to two, as the last true threat, but his chance imploded on the par-5 17th – when he cooked his third shot over the green, then chipped back over the green and into the water. He made triple-bogey 8 – sullying a round of 3-under 67. He finished at 9 under, tied for fourth with Palmer (71), Rickie Fowler (68) and Jim Furyk (66).

Watson shot 66 to finish second, his small chance at victory essentially ending when his ball landed up against a divot on the 18th fairway that he couldn’t move, lest the ball roll downhill. He closed the day third in the standings, joining Kirk, Rory McIlroy and Hunter Mahan among the top five, all of whom control their destiny next week – meaning a win will give them the playoff title, as well.

Palmer’s fourth-place finish moved him from 37th to 23rd.

But outside of Horschel, Sunday’s biggest winner was third-place finisher Morgan Hoffman, who turned the old-school, mile-high layout at Cherry Hills into his personal pitch and putt over the weekend. He shot 7-under 63 on Sunday to go with his course-record 62 on Saturday and vaulted from 68th to 21st in the standings. He started the playoffs 124th.

“That’s the perfect way of putting it – `nothing to lose,'” Hoffman said. “Carefree and just go out and fire at pins.”

McIlroy finished tied for eighth after a 66 that included a replay of the worst kind – a four-putt on the 12th green for the second straight day. Still, he’s comfortably in the mix for next week.

Also making it were Hideki Matsuyama, who was 28th in the standings after finishing at 4 under and Gary Woodland, who held onto the 29th spot.

In 30th place is Dustin Johnson, whose season is over. Stuart Appleby missed an 18-foot birdie try on his last hole to end up in 31st and Keegan Bradley’s decision to withdraw Saturday because of a question over a drop he took in the opening round left him in 33rd, a five-spot drop.

Graham DeLaet did not advance to the Tour Championship. A costly triple bogey on the par-3 15th hole would seal his fate, leading to a 11th place finish at 7-under 273. DeLaet – the last Canadian remaining in the PGA Tour playoffs – finished 37th in the FedEx standings to miss by seven spots.