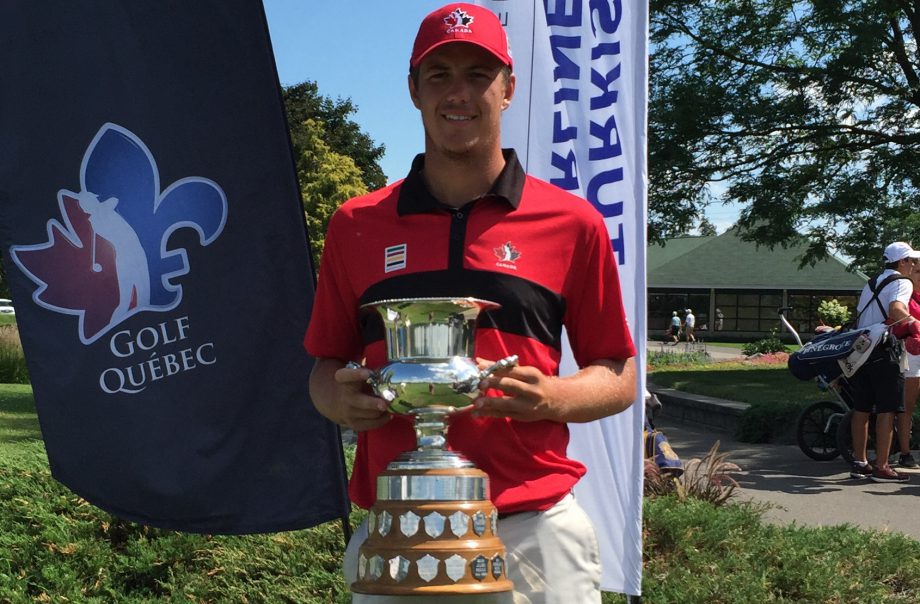 Hugo Bernard had a quick turn around following his July 2 win at the Dogwood Invitational at the Druid Hills Golf Club in Atlanta, Ga. One day removed from his victory, the native of Mont St-Hilaire, Que., arrived at the Ottawa Hunt Golf Club to compete in the 67th edition of the Lord Alexander of Tunis Championship – the first stage of Golf Québec’s Triple Crown. The Team Canada National Team member put on quite the show to capture the prestigious event.

The 21-year-old tallied five birdies en route to a 3-under 68 to sit at the head of the pack alongside Ottawa’s Robert Mustard. Bernard followed his strong opening round by recording six of his seven second-round birdies on the back nine for a 5-under day to emerge with a two-stroke victory and an 8-under 134 final score.

Bernard, Papineau, Sevigny, Brault, Savoie and Chung will compete at the Royal Québec Golf Club in Boischatel, Que., from July 8-9 at The Duke of Kent Championship.

Golf Québec’s Triple Crown is comprised of the Alexander of Tunis, the Duke of Kent and the Québec Amateur Championship. The Top-3 golfers on the Triple Crown Order of Merit will form the provincial team that will represent Québec at the Canadian Men’s Amateur Championship to be contested at the Royal Ottawa Golf Club in Gatineau, Que., and Eagle Creek Golf Club in Dunrobin, Ont., from August 8-11.