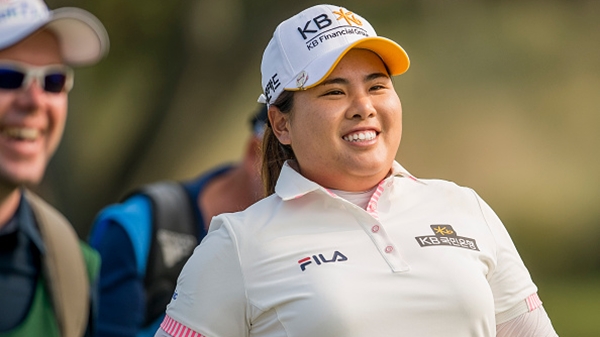 TAIPEI, Taiwan – Inbee Park shot a 10-under 62 on Friday at Miramar to take a three-stroke lead in the LPGA Taiwan Championship, her first event since regaining the No. 1 spot in the world Monday.

“Everything was working really good out there today,” Park said. “I probably didn’t hit as close as yesterday, but I holed a lot of putts today. And this season, I’ve been struggling with my putter. This week has been totally different to what I’ve been putting.”

The South Korean star played the first eight holes in 6 under, holing out from 82 yards for eagle on the par-4 eighth and making five birdies and a bogey. She birdied four of the first six holes on the back nine and closed with three pars.

At 18-under 126, she matched the lowest 36-hole score in relation to par in LPGA history. The 10-under round matched the best to par on the tour this season.

“I’m doing really well on the greens this week and obviously two days without the wind here in Taiwan is really unusual,” Park said. “I thought I should take advantage of that for two days and I feel like I did that.”

She was thinking about shooting 59.

“Yeah, definitely thought it was possible going into 13, 14, because coming down the stretch, I thought it was a lot of birdie holes,” Park said. “Especially the last, it’s a par 5. Yeah, I definitely had that in my mind. I had a score this year, 61, which was my best round and I really wanted to beat that one. But just came one short.”

Park won the LPGA Championship in August for her second victory of the year and fifth major title. Last year, she swept the first three majors and won six times.

China’s Shanshan Feng was second after a 65.

South Korea’s Mirim Lee also shot a 62 to join third-ranked Lydia Ko, Azahara Munoz and Line Vedel at 10 under. Lee won the Reignwood LPGA Classic on Oct. 5 in China for her second victory of the year.

“My irons were very good, so I had a lot of chances,” Lee said.

Ko had six straight birdies on Nos. 3-8 in a 65. The 17-year-old New Zealander won the Swinging Skirts World Ladies Masters in December at Miramar.

“It’s a course where you can shoot some low scores,” Ko said. “I haven’t actually seen the course where there’s hardly any wind. So it’s kind of different. I kind of feel like, `Man, am I playing the same course?'”

Second-ranked Stacy Lewis was 9 under after a 68.

Norway’s Suzann Pettersen, the winner the last two years at Sunrise, was 7 under after a 71. Michelle Wie followed her opening 68 with a 70 to reach 6 under.

“I was actually thinking about a hole-in-one, because I’ve been touching that car,” Kang said. “I really wanted the car. … It hit the fringe, like the collar, and it just kicked straight in and just rolled, tracked all the way into the hole.”

Last week in the first round of the Blue Bay LPGA in China, the 22-year-old American had a hole-in-one with an 8-iron on the 155-yard 17th hole to win a Buick LaCrosse.

“Everyone was saying, “Are you kidding me? Again? Another car?” Kang said.

Kang has three aces in LPGA Tour play this season to tie the record set by Tracy Kerdyk in 1991 and matched by Charlotta Sorenstam in 2002.

Kang’s other hole-in-one came in the LOTTE Championship in April in Hawaii. She also had one this year in a non-competitive round and has eight aces in her life.