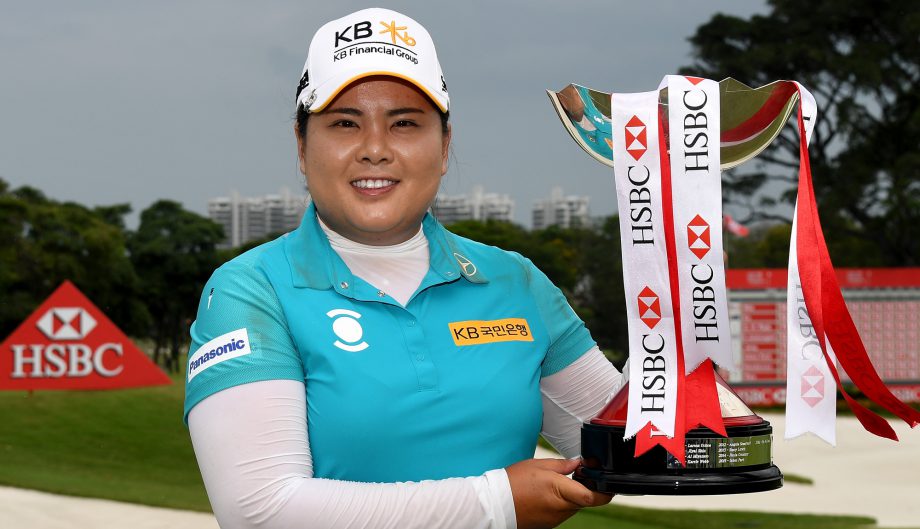 SINGAPORE – Inbee Park won the HSBC Women’s Champions tournament by one stroke on Sunday after closing with a round of 8-under 64.

The South Korean finished on 19-under 269 at the Sentosa Golf Club, one shot clear of her playing partner Ariya Jutanugarn, who was second after a 66.

Sung Hyun Park (68) was third, a further shot back, while overnight leader Michelle Wie dropped back into a tie for fourth after a 72.

Wie was two in front after making birdies on the second and third holes before her round unraveled when she four-putted for a double-bogey on the par-5 fifth.

Inbee made her first birdie of the day on the same hole that Wie’s charge started to falter, then proceeded to reel off another eight birdies to the 17th hole, draining a series of long putts in a near-flawless display on the greens.

“My putting was amazing today, obviously,” she said. “I couldn’t make any putts yesterday and obviously I made up for it today.

“Pretty much everything I looked at, it wanted to drop in. It was very consistent ball-striking all week, and obviously there is a lot of birdie opportunities out there and I was able to convert the birdies.”

Despite being a seven-time major winner, Inbee Park said she surprised herself by winning so soon. The 28-year-old took six months off shortly after winning the gold medal at the Rio Olympics last year to recover from a thumb injury and was playing only her second event.

“I thought it may take maybe a couple months to kind of get back out on the tour and to get my rhythm back,” she said. “I thought I was going to be just a little bit rusty. That’s how I felt exactly last week. This week was totally different. Especially the final round was just what I wanted.”

Jutanugarn was tied with Park after 10 holes and was left in awe at her playing partner’s performance.

“I had so much fun playing playing with Inbee. She’s awesome. She’s the best player,” said Jutanugarn. “I learned a lot from her. She’s very calm. I feel like she makes every putt. I don’t think she missed one today.”

There was some drama even after Inbee Park clinched the title when play was halted because of an electrical storm, with Sung Hyun Park , Wie and Ko still on the course, within a wedge shot off the 18th.

When the weather cleared and play resumed, the trio finished off their rounds and Park received her winner’s trophy.

Ko shot a final-round 72 and finished at 12-under, seven behind.