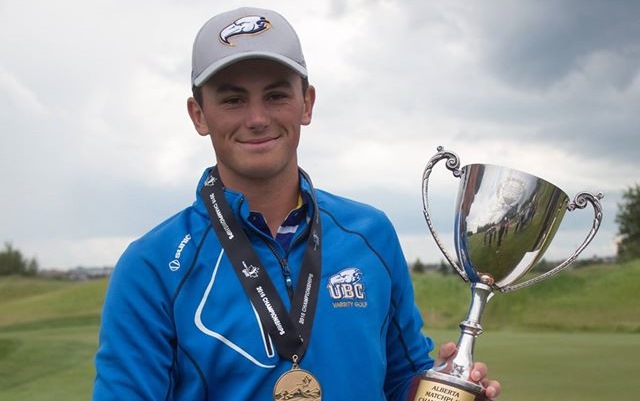 EDMONTON – Jack Wood, a Banff Springs Golf Club phenom, needed one extra hole in the final match to claim victory at the 2016 Alberta Match Play Championship. The UBC Thunderbird and No. 10 seeded player took down the No. 1 seed University of Houston Cougar, Matt Williams.

Williams held a 1-up advantage on the final hole when play was suspended due to dangerous weather conditions with players in the fairway. When play resumed, Wood was able to save par while Williams bogeyed, sending the match to extra holes. Wood made a solid par three on the extra hole while Williams again bogeyed, leaving Wood victorious after four gruelling matches over the past two days at RedTail Landing Golf Club.

By virtue of competing in the final match both Wood and Williams have earned quota positions into the 2016 Canadian Men’s Amateur Championship taking place at The Royal Ottawa Golf Club, August 8-11th. Wood has also punched his ticket into the 2017 Pacific Coast Amateur Championship. He becomes the second member selected to Team Alberta after Emmett Oh of Calgary earned the first spot last week at The Glencoe Invitational where he finished as the low Albertan.