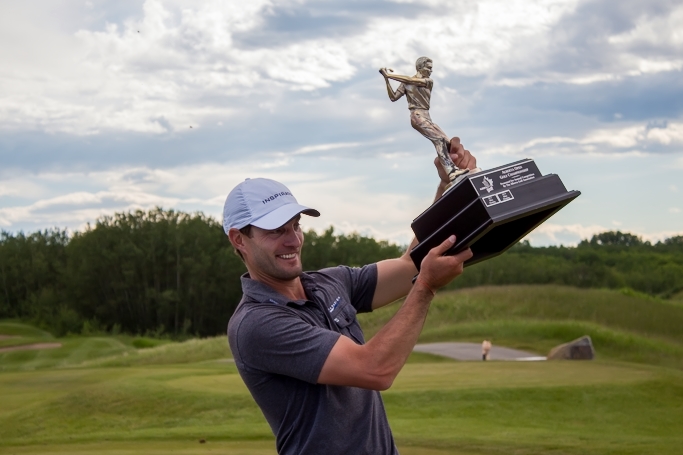 CALGARY – Calgary’s James Love took the win with a tournament total of 7-under 135 for the Alberta Open Championship at Carnmoney Golf & Country Club. Starting the final round in sixth place, Love played a strong game on the second day, allowing him to capture the title.

Love started the front nine strong with a birdie on the first hole, continuing with a double-bogey on the second and a birdie again on the third hole. A remarkable comeback on hole 16 had Love drop 75 yards from the pin after putting it in the water and hit his approach, one bounce into the cup to save par. His five consecutive birdies on holes 9 through 13 contributed to his stellar final round score of 66.

The whirlwind victory was emotional for the 31 year old Love, who recently suffered the loss of his father to cancer. “To win this event is nice,” a teary Love explained, “he was my biggest fan and my best friend.”

As the winner of the 2015 Alberta Open, James Love has earned an exemption into the Mackenzie Tour – PGA Tour Canada’s Syncrude Boreal Open, set to take place June 25th to 28th at Fort McMurray Golf Course.

On the 18th hole, both Tyler Saunders and Dustin Risdon had their chances to win or tie Love at 7 under par. Unfortunately, both were unable to capitalize on the opportunity and could not force a play off.

The 2015 Alberta Open Championship will be remembered for its many highlights. Among those were Alexander Scherer, who scored an albatross on the 18th hole. Scherer couldn’t see how the shot played out initially. “Is it in?” Scherer reflects on the experience, “he said it was in and that’s when my mind was blown. I needed it.”

Over 90 players competed at Carnmoney Golf & Country Club in Dewinton, Alberta. Playing off the championship tees, Carnmoney is designed to challenge experienced golfers. The course played at 6.858 yards, par 71. The support from the host club staff and volunteers was amazing. “They truly make conducting a championship of this caliber possible,” says Jack Lane, Tournament Director.