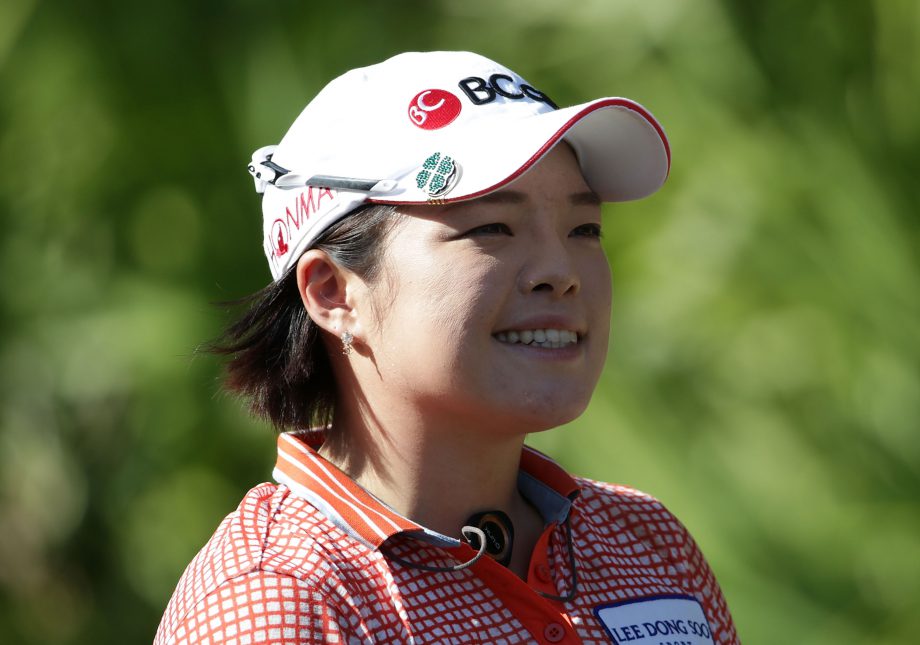 PARADISE ISLAND, Bahamas – Charley Hull and Anna Nordqvist shared the lead Saturday in the season-opening Pure Silk-Bahamas LPGA Classic, and Ha Na Jang had the first hole-in-one on a par 4 in tour history.

Hull made a 10-foot birdie putt on the par-5 18th to match European Solheim Cup teammate Nordqvist at 12-under 207 in breezy but calmer conditions at the Ocean Club. The 19-year-old Hull, from England, had a 4-under 69. Nordqvist, from Sweden, also birdied the 18th for a 68.

“It’s a little different because, obviously, it’s been really windy, so I got used to playing in that wind.” Hull said. “And today the first couple holes I think I was allowing too much of the wind and there wasn’t that much up there.”

Jang made the albatross on the eighth hole, at a mere 218 yards playing at a distance normally considered a par 3. Her 3-wood shot into light wind landed a yard in front of the green and rolled in.

She was disappointed that she didn’t win a car.

The South Korean player was five strokes back after a 68.

Winless in 30 career starts on the LPGA Tour, Hull birdied four of her last eight holes. She had a bit of an adventure Friday night at dinner when a candle burned her napkin.

“I was like, ‘Oh, good thing we didn’t have the pizza because it smells a bit burny,'” Hull said. “I looked down and there’s this hole like growing bigger and bigger and bigger, and I’m like, ‘Sheez!'” So I patted it out.”

Nordqvist rebounded after hitting a wedge approach long into the water for a bogey on the par-5 11th. She won the ShopRite LPGA Classic last year in New Jersey for her fifth LPGA Tour title.

“I’m really excited,” Nordqvist said. “I really had zero expectations coming into this week. It’s the first tournament of the year. I’m just excited to be back playing. Put in a lot of work this winter.”

Lewis won the last of her 11 LPGA Tour titles in June 2014, a 39-event drought that includes eight runner-up finishes.

Sei Young Kim birdied the 18th after losing the lead with a double bogey on the par-4 16th. On 16, she drove left in palm trees, chipped out through the fairway and into the rough, and hit her third over the green into bushes that line the water. She made a 12-foot putt to save double bogey.

“The tee shot was a bad choice,” Sei Young Kim said about her decision to use a driver. “I’m very disappointed there. I’m OK. I have a one day tomorrow.”

Hyo Joo Kim chipped in for eagle on 18.

Megan Khang, playing her first event as an LPGA Tour member, was two shots back along with 2013 winner Ilhee Lee. The 18-year-old Khang, from Rockland, Massachusetts, had a 71 after shooting a 68 on Friday for a share of the lead with Hull and Haru Nomura.

“Wind was definitely better today,” Khang said. “So much the driving and approach shots, so much the putting, I just couldn’t find a putt to drop. … I definitely am excited for tomorrow.”

Canadians Brooke Henderson and Maude-Aimee LeBlanc have a share of 16th at 6-under after matching 70s Saturday. Compatriot Alena Sharp is 3-under and has a share of 31st.