Jason Day wins at Torrey Pines in a four-man playoff 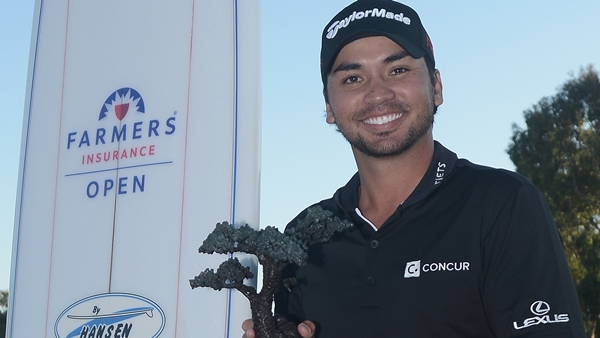 SAN DIEGO – Jason Day was playing to win and figured he lost.

His chip from gnarly rough behind the 18th green at Torrey Pines came out hot, rolled out fast and tumbled off the front of the green toward the water. After a week of visualizing his hands on the trophy, his thoughts quickly changed to a more dire scenario.

The cheers told him otherwise. The ball stopped at the yellow hazard line a few feet from the water. Day saved par from there, got into a four-man playoff and won the Farmers Insurance Open on Sunday with a par on the second extra hole.

“When you win golf tournaments, you have to have a little bit of luck,” Day said. “And that was my luck.”

There was plenty of skill to go with it.

Day made two big birdies and a par save from a plugged lie in the bunker during a tough stretch on the back nine and closed with a 2-under 70. He played a smart shot on the par-5 18th in the playoff and made birdie with a superb pitch. And he outlasted J.B. Holmes on the par-3 16th with a 5-iron to 15 feet after Holmes drilled his 6-iron over the green and made bogey.

Harris English, who birdied the 18th hole for a 72, and defending champion Scott Stallings (69) also were in the playoff. They were eliminated on the first extra hole.

It was a big win for Day, who was more determined than ever not to let injuries get in the way of his lifelong goal of No. 1 in the world. For now, he’ll have to settle for No. 1 in Australia. The third PGA Tour victory of his career moved him to No. 4, just ahead of Adam Scott, still miles behind Rory McIlroy. But it’s a start, and equally important to winning is staying in good health.

After winning the Match Play Championship a year ago to rise to No. 4 in the world, he played only the Masters in the next three months because of a thumb injury.

“It’s an amazing feeling,” Day said. “I’ve been working so hard for this. I was visualizing myself holding the trophy, just like I did at the Match Play. I’m really proud of myself to hang in there and grind it out.”

Day said he no longer wants to be satisfied finishing second, and it showed. Tied for the lead, he took a chance in regulation by going for the 18th green in two. He pulled a 3-wood to clear the water, but over the green in U.S. Open-type rough is no bargain, and it nearly cost him.

Holmes played it safe with no regrets.

In the final group and tied for the lead, he had 235 yards to the pin and chose to lay up with an 8-iron. He was surprised when his wedge didn’t spin back toward the bowl at the front of the green, and his 20-foot birdie putt for the win grazed the cup. He closed with a 72.

A little shorter or longer in the fairway and he said he would have gone for it. But the ball was on a slightly downhill lie.

“It was a lie that my tendency is to hit it a little bit further and hit a draw, and long and left is dead,” Holmes said. “If you hit something over the green there, it’s not really an easy up-and-down. It’s not really the best access to the pin. The best play is to lay up and hit a wedge. I had the same thing again, I would lay up.”

English and Stallings were eliminated on the first extra hole. Stallings had to lay up from the left rough, and his 15-foot birdie putt turned away. English drove well to the right, but his short iron back to the fairway was too strong and settled on the border of the first cut and 4-inch grass. He couldn’t get any spin on the ball, and was left with a 60-foot birdie putt from the back of the green to stay alive. It stopped a few inches short.

Equally important for Day were the holes leading up to the 18th. He made one of only four birdies at the 15th, and he holed a 50-foot putt on the 16th for one of only five birdies in the final round. From a plugged lie in a bunker at the 17th, he got up-and-down.

Day was among seven players who had at least a share of the lead on a Sunday that was more about survival than a shootout. It was the first time that a single-digit score under par – 9-under 279 – won on the PGA Tour since Justin Rose (4-under 276) at Congressional last summer.

Charles Howell III (68) and Alex Prugh (71) each missed birdie chances on the 18th and finished a shot out of the playoff.

Adam Hadwin of Abbotsford, B.C. was the top Canadian, finishing tied for 32nd at 1-under 287.