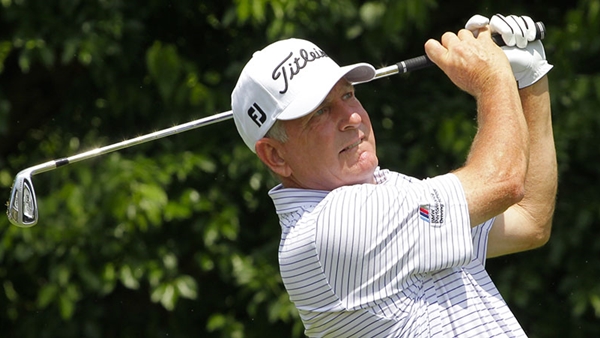 CONOVER, N.C. – Jay Haas shot a 4-under-par 67 Saturday to take a two-stroke lead after the second round of the Champions Tour’s Greater Hickory Kia Classic.

“I played well again today – maybe not quite as well as yesterday, but I had some chances today and didn’t capitalize,” Haas said. “It was a little tougher today. The wind was stronger in places, and the course played differently. But I’m pleased. Obviously I did some good things out there.

“I’m glad to be in the lead. But in looking at that leaderboard, there were two 63s yesterday and a couple of 65s today. There are scores like that that can be shot out there. I’m just going to have to be aggressive, and capitalize when I have the good shots.”

A 16-time winner on the 50-and-over tour, Haas has gone 27 months without a tournament win. His last title came in June 2012 in Des Moines, Iowa – also the last time that Haas has had sole possession of the lead entering a tournament’s final round.

“I haven’t had the lead going into Sunday, but I’ve had four or five really good chances to win and haven’t done it,” Haas said. “It has been a while since I’ve won, but I’ve played as consistently this year as I ever have. I feel like I’m going to go out and play a pretty good round tomorrow. Whether it’ll be good enough, well, we’ll see.”

Joe Durant, tied for the first-round lead with Haas at 63, had a 69 to drop into a tie for second with Kirk Triplett and South Africa’s David Frost. Triplett, the winner last week, had a 66, and Frost shot 65.

Frost, a five-time Champions Tour winner, had seven birdies and a bogey to make the best round of the day with Skip Kendall and Kenny Perry.

“There are a lot of birdies out there,” Frost said. “All in all, I played well. I feel like right now I’m playing unconscious golf, having played so much golf the past three months. I’m just going with the flow.”

“If you’re striking the ball solid, you’re going to have some birdie chances,” Triplett said. “You can’t be thinking you’ve going to shoot 2 under and move up or hold your place. You’ve got to be aggressive, and try to make a half-dozen birdies.”

Jim Rutledge carded another 71 to remain at even par 142, falling three leaderboard spots into a tie for 52nd.