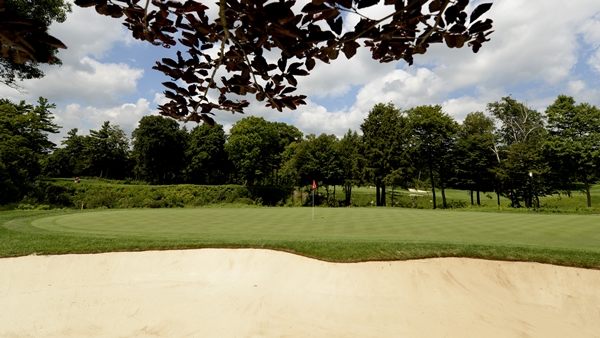 LONDON, Ont. – The only all-Canadian group at the Canadian Pacific Women’s Open got more than polite golf claps from the many fans who followed them throughout the first round.

“They clapped for everything,” Brooke Henderson said. “It was awesome. The support out there was amazing.”

Buoyed by that support, Jennifer Kirby had the best day of any Canadian with a 5-under 67, while Henderson and Rebecca Lee-Bentham each shot 2 under.

Inside the ropes, Kirby said playing with two friends made her feel “comfortable.” The Paris, Ont., native was able to play it safe and still hole five birdies.

“Bogey-free round, took advantage of the par 5s for the most part and hit it close on a few and didn’t really make any big mistakes,” Kirby said.

Kirby goes into Friday’s morning tee time four strokes behind leader So Yeon Ryu, who set a new course record at the London Hunt and Country Club with her 9-under 63.

Henderson, the 16-year-old amateur phenom, and Lee-Bentham aren’t far off the pace. There was plenty of pressure on Henderson going into the tournament, but she showed no signs of cracking Thursday.

“I hit the ball great all day,” the Smiths Falls, Ont., native said. “I hit a lot of greens and had a lot of opportunities for birdie. They didn’t fall today but hopefully over the next couple of days they’ll make up for it.”

Lee-Bentham, who’s from Toronto, said she “felt a lot of love” from the crowd all day.

“It’s more than usual, so it was more fun out there,” she said.

A few other Canadians were able to have fun without stressing about playing in front of home-country fans. Amateur Elizabeth Tong of Thornhill, Ont., and Sara-Maude Juneau of Fossambault, Que., joined Henderson and Lee-Bentham at 2 under.

Tong, who’s going back to school at the University of Indiana next week, just qualified Monday and called being in the tournament a bonus.

“That beat my expectations,” Tong said of her first round. “I was just looking to shoot like around par, keep it together, because I definitely knew people were going to shoot like 64, 65 the whole day. Just keep myself in there because the main goal is to make the cut, if anything. I think I put myself in a good position there.”

Sue Kim from Langley, B.C., was the only other Canadian of the 15 in the tournament to be under par at 1 under.