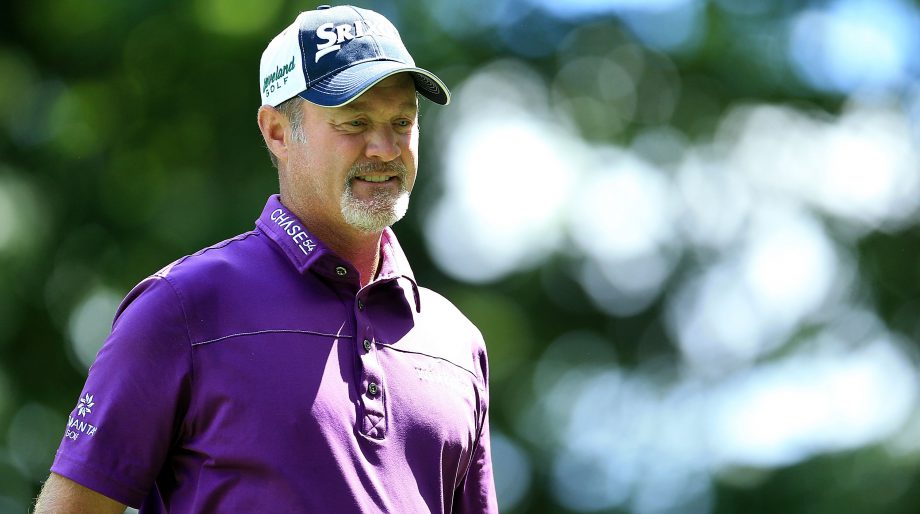 CROMWELL, Conn. – Jerry Kelly played off the emotion of what he considers a home crowd Thursday in the Travelers Championship, shooting a 6-under 64 for a share of the first-round lead with Vaughn Taylor and Andrew Loupe.

The 49-year-old Kelly played at the nearby University of Hartford. Headed to the PGA Tour Champions after this season, Kelly won the last of his three PGA Tour titles in 2009.

“I’m not that man who has people constantly yelling wherever I go,” Kelly said. “I kind of take those good vibes and run with it. It’s fun.”

Kelly started his afternoon on the back nine, sinking a 45-foot putt for eagle on his sixth hole of the day, the course’s signature par-4 15th. The green was redesigned as part of a $3.5 million course renovation project this year and the front left pin placement was new.

“It was a question mark, how fast it was going to be and I judged it correctly, apparently,” he said.

Loupe and Taylor went out early, when relatively soft greens and little wind helped the scoring.

Taylor, the 40-year-old who won for the first time since 2005 at Pebble Beach this year, strung together five consecutive birdies starting on the 12th hole and shot a 30 on the back nine.

“That was a nice little run and I needed that,” Taylor said. “I was playing well and just needed something to kind of get me going.”

Loupe, who at 27 is looking for his first PGA Tour win, had seven birdies and a bogey on the day. He pulled into a tie for the lead after a 128-yard approach shot on 18 gave him a 2-foot birdie putt.

Nick Taylor, of Abbotsford, B.C., is tied for 24th after an opening round 68 while fellow Abbotsford native Adam Hadwin finished with a 70. Derek Gillespie (72), of Oshawa, Ont., is at 2 over.

Jon Rahm, the 21-year-old Spaniard who turned pro in June, eagled the par-5 13th hole and was a stroke back along with Ben Martin and Marc Leishman.

They are playing the first two rounds as a trio, and fans stood four and five deep at times to watch them, chanting “USA! USA!” as they arrived at the 18th tee.

Reed was using the red, white and blue golf bag he received this week as part of his Olympic team gear

“All three of us are very excited and eager to get over there,” said Watson, the tournament’s defending champion. “We hear all the USA chants. But at the same time, you want to play well here.”

Besides the Americans, three other Olympians are playing in Cromwell.

Denmark’s Soren Kjeldsen and Germany’s Alex Cejka each shot 68, and Ireland’s Padraig Harrington came in at an even-par 70.

The tournament was moved from its traditional spot in June, a week after the U.S. Open, as the PGA Tour shuffled its schedule to accommodate the Olympics.

But the schedule didn’t affect the quality of the field, which includes 10 players ranked in the top 30 in the world, led by Watson, who came into the week ranked sixth.